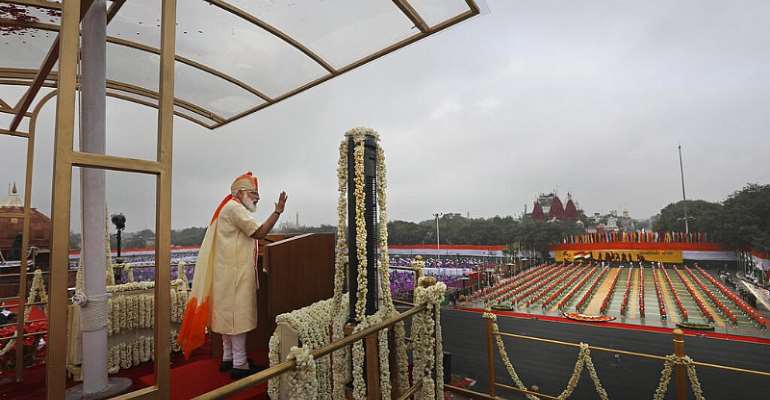 Prime Minister Narendra Modi has promised that India's 1.3 billion citizens will all have rapid access to the coronavirus vaccine once ready, as he rolled out several national projects including digital health records for all citizens and internet services in India's 600,000 villages, on the country's Independence Day.

In scaled-down celebrations for the 74th anniversary of independence, Narendra Modi said economic self-reliance would be a cornerstone of his policies.

He also vaunted India's determination to fight off cross-border aggression in direct warning to China, which he did not name, after a June skirmish in the Kashmir region.

Modi's announcements came as India's Covid-19 infections crossed 2.5 million, with some 64,000 new cases reported in the past 24 hours to Friday.

“Not one, not two but three vaccines are at different stages of trial in India and we are ready for the mass production of a vaccine,” Modi said in his annual address from the ramparts of the Red Fort in India's capital Delhi.

“A blueprint for distribution of the vaccine to every single Indian in the least possible time is also in place."

Independence Day celebrations were devoid of the usual gathering of school children, and pre-selected guests were seated in line with distancing protocols at the foot of the 17-century fort.

Ceremonials guards at the Red Fort were in quarantine for days ahead of Saturday's event.

"Every Indian will get a health ID. Every time you visit a doctor or a pharmacy, everything will be logged in this card. From the doctor's appointment to medication, everything will be available in your health profile," he said in his 96-minute address.

“Technology will be judiciously used to reduce challenges in treatments.”

The premier's pitch for internet across India in 1,000 days – originally rooted in a 2011 project launched by a previous government – has missed several deadlines.

“In the coming 1,000 days, every village in the country will be connected with optical fibre,” Modi said.

Technology experts such Faisal Kawoosa warned the project could face roadblocks just as before.

“The issue is how to implement it,” Kawoosa, founder of a technology research service, told RFI.

“We have all been very unfriendly with telecoms as everybody feels it is a cash cow. Whenever anybody comes with a project, the first thing in mind is: 'OK, how am I going to extract as much money as possible?'" he said.

Saturday's Independence Day celebrations also mark the 25th anniversary of public internet services in India. On 15 August 1995, the country rolled out its first dial-up connection services, offering speeds of 9.6 kbps at a minimum cost of 54.40 euros for 250 hours.

Prime Minister Modi said a brawl between Indian and Chinese militaries in the Himalayan Ladakh region in June displayed India's determination to protect its borders.

"What our soldiers can do, what the country can do, the world has seen in Ladakh,” he said.

Twenty Indian soldiers died in the hand-to-hand skirmish. India says Chinese casualties were higher although the neighbouring state has released no figures.

Both sides accuse each other of cross-border intrusions in Ladakh and several rounds of border talks have so far failed to end the stalemate, a military source told RFI.