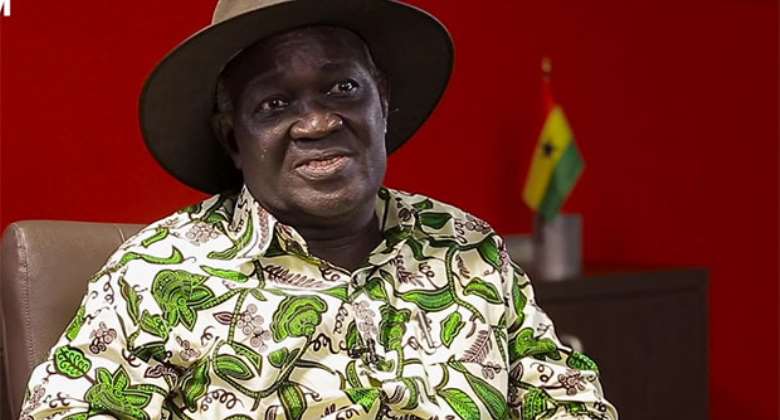 Professor Kwamena Ahwoi has detailed in his book 'Working with Rawlings' how some powerful cabal in the opposition National Democratic Congress (NDC) tried to get the then NDC leader, Flt. Lt. Jerry John Rawlings, to continue to rule Ghana despite being constitutionally barred.

It meant they were going to push for an amendment of the 1992 Constitution which prevents a third term for any President to enable Mr. Rawlings to continue to rule after 19 years (11 years as military junta leader and eight under democracy) in power.

Prof. Ahwoi claimed in the book that some NDC gurus contemplated getting Supreme Court judges to change the rule that barred the President from running again after two terms, so that the Rawlings agenda, which he claimed, was unknown to himself and the former President, would be prosecuted.

He said the Swedru Declaration which was the handpicking of the then Vice-President, Prof. John Evans Atta Mills, by Mr. Rawlings at Swedru in the Central Region without any NDC congress to elect him to lead the party to the 2000 election, was something Mr. Rawlings did to scatter the so-called third term agenda.

“The Swedru Declaration had everything to do with the politics of the succession to Jerry John Rawlings as the NDC presidential candidate,” Prof. Ahwoi said, adding, “By the Constitution of the Fourth Republic of Ghana, President Rawlings would have finished his two four-year terms as President on January 6th 2001. He was therefore ineligible to contest the 2000 presidential election. Who was to succeed him as the NDC presidential candidate for that election had become the issue of the day for the party?”

“It was clear that there was no official NDC succession plan to follow President Rawlings' exit. Some put it bluntly that the PNDC/NDC never allowed the party to develop institutionally to the point where it could develop or manage a succession.

He said “they were of the view that there existed elite conspiracies to secure Rawlings' endorsement within the context of a programme of Rawlings' self-succession, either directly or by proxy,” adding, “Rumours also abounded about unofficial succession plans that had been hatched or were being hatched by individuals or groups within the party. One such rumour was to the effect that the NDC had a plan to enable President Rawlings to run for a third term.”

Prof. Ahwoi said “That plan would involve getting the Supreme Court to render a Rosemary Ekwam-type judgement in which a plaintiff would be found to try to convince the Court to interpret the Constitution to mean that Presidents could run for more than two terms.”

“Another of such rumours involved plans for a straightforward attempt by the NDC Government to amend the Constitution through a referendum to allow for Presidents to run for more than two terms,” he said but claimed that “I was not aware of any such plans existing. I am sure that if there had been any such plans, I would have been one of the first to know. That I did not know must mean that there were no such plans.”

Prof. Ahwoi said, “However, some people disagree with me. They argue that my non-awareness of efforts towards a third term for Rawlings did not mean that that option did not receive serious consideration among certain sections of the party. They think it only meant that that option was abandoned before my inputs were required.”

He said, “According to this view, there were many power blocks around President Rawlings.”

Prof. Ahowi also said that “another rumoured unofficial, unilateral plan was for Nana Konadu Agyeman-Rawlings to succeed her husband as the NDC presidential

candidate. What appeared to give credibility to the rumour was the reported arrival at the Tema Harbour of large consignments of containers containing “Konadu for President 2000” T-shirts and other Nana Konadu Agyeman-Rawlings paraphernalia. I, however, did not have any evidence to support the rumour.”

He said that other NDC personalities who were rumoured to be interested in succeeding President Rawlings included Dr. Obed Asamoah, Mr. J. H. Owusu-Acheampong and Alhaji Mahama Idrissu.

“Rawlings appeared not to be too happy about all these ambitious 'conspirators' orchestrating to take over the baton from him and conceived a plan to pre-empt these moves and nip the conspiracies in the bud,” Prof. Awoi said, adding, “His aim appeared to be to curtail the simmering ambition of all those persons who saw themselves as 'heirs apparent'. This, it appeared, was Rawlings' real reason for the 'Swedru Declaration'.”