Do You Trust Former President John Mahama to Honour his Electioneering Promises? 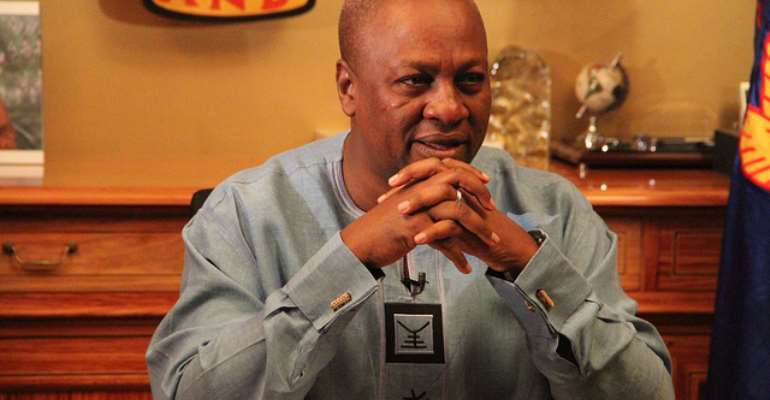 I am scratching my head while in a thoughtful mood trying to understand why some Ghanaians still trust former President John Dramani Mahama as able and capable of governing the nation with excellence. I keep asking myself if the people supportive of former President Mahama to recapture the presidency of Ghana are not simply being ignorant, or are not acting in dictates to the pangs of their stomach; how to amass wealth at the blink of the eye to quench their insatiable greed for fame, power and whatnot?

I watched agape at a video in which former President Mahama, also now a presidential-candidate contesting for re-election to come back to occupy the presidency, telling his congregated NDC supporters that in the dead of election year, politicians including himself, do lie to the electorate, telling them both lies and truth depending on the occasion and what the electorate wants to hear, all with intent to woo their hearts to win the election.

What do his hearers take themselves for if after listening to his politically incorrect message and they continue to trust him, casting their vote for him in the hope that he wins the impending election to become the President of Ghana? Will they not be a bunch of fools? No wonder that he proudly says, and wholeheartedly believes, that Ghanaians have a short memory and that he will never listen to anyone who has never occupied the presidency before. How does one expect him to value them, listen to them, if they easily buy into his lies?

From the horses own mouth, how do you trust him if he says he will introduce a new "Operation Sting", an anti-corruption crusade, to mercilessly fight official corruption in Ghana? Is his very personality not a walking corruption? A person who stinks of corruption when he passes by. Why was his brother able to secure a loan of three hundred and two million Ghana New Cedis (GHC302,000,000) from then UT Bank, now consolidated, without presenting any collateral security? If he had not somehow been involved, or by the fact of his personal corruptness, aided his younger sibling to dubiously obtain the loan, why would the Managers, Board Members and Directors of the bank consult him, seeking his help to get his brother honour the payment of the loan? Nevertheless, his brother has refused to pay even a pesewa or a Cedi until today that the bank has suffered insolvency, thrown into receivership and finally consolidated along with others into what is now Ghana Consolidated Bank, if I am right.

Is he not the elected Ghana elected government official 1 as far as the Airbus scandal goes? Is he not alleged to have been ordered by the late President Professor Evans Atta Mills to be investigated for corrupt practices relating to the intended purchase of Embraer aircrafts from Brazil? How can such a walking corrupt personality be trusted to fight corruption? His record of incapability to fighting corruption in his administration is clearly out there for all serious and discerning apolitical Ghanaians to read and know.

Did his same brother not craftily evade import duty payments by issuing dud cheques to the tune of GHC12 million for two consecutive years only to scuttle like a frightened dog with its tail tucked in-between its legs to pay off his accumulated import duties when hounded by Kennedy Agyapong (Honourable)? Was his government not fraught with dubious and inflated judgment debt payments that became the sloganized "Create, Loot and Share?"

How do you trust someone who could not create jobs in his entire time at the presidency both as the Vice and the full-time President but took Ghana to the International Monetary Fund (IMF), accepted their harsh economic conditionalities, froze public service employment, etc., to create one million jobs if he wins back power? Is it not the lies that Ghanaians want to hear that he is telling us?

To decouple the Bank of Ghana's (BoG) oversight responsibility of the banks and the micro finance companies by creating a Financial Services Authority (FSA) is a good idea hatched by presidential-candidate John Dramani Mahama. It is to reduce the burden of the BoG to ensure the banks and the smaller financial institutions are closely monitored to avoid the reoccurrence of banks unscrupulously doing business to find themselves needing government liquidity support, then abusing it, as has just happened to culminate in the painful consolidation of some indigenous banks. However, with the corrupt nature of former President Mahama, there is no guarantee that any such authority will be independent from his long corrupt arm. Such an institution will just be a white elephant under Mr Mahama.

How can he get money to buy cars for his many NDC chiefs, girlfriends, media agents and assigns and those that he allegedly employs or supports to insult or attack his political opponents, e.g. Kevin Ebow Baidoo Taylor, Kwame Asare aka A-Plus and that ignoramus called Salifu Maase aka Mugabe, if he should give the FSA full independence?

In a nutshell, discerning Ghanaians are entreated not to entrust the visionless, clueless and corrupt John Dramani Mahama with the governance of Ghana anymore. For it is said, "Once bitten, twice shy". The Akans have a proverb that goes, "Kwatrekwa se 3be ma wo ntoma a tie ne din". When a naked person promises to offer you a cloth, ask for the name of the cloth he himself is wearing" If the person has no cloth on his person, how can he promise you one? Therefore, how can a known corrupt person fight corruption? How can a known economically incompetent and clueless person assure you that he will create more jobs and you unquestionably fall for it? How can someone who has told you to your face that he lies in order to win your heart turn round to persuade you by saying otherwise when you know he critically needs your vote, for you to swallow what he is now telling you hook, line and sinker?

Mr Mahama, please be steady for I shall be explaining whatever you say in simple words to the Ghanaian public. No more lies but the absolute truth. Most of your promises are simply frivolous! I personally don't trust you a bit!