How we found the earliest glass production south of the Sahara, and what it means

By Abidemi Babatunde Babalola - The Conversation 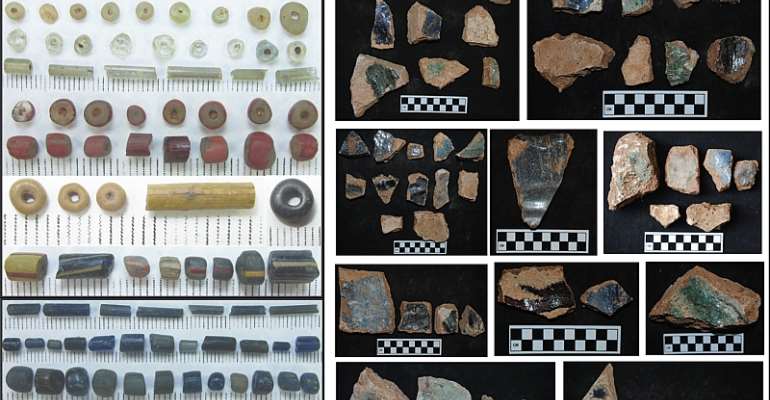 The story of humankind from the earliest times to the present is in many ways a story about technology. Archaeologists tend to study the development of technology to show how people lived and how they interacted with their environment.

Discoveries of technological innovation and skill in ancient African societies have challenged western theories that had no place for such evidence. Western scholars tried instead to explain these findings as the result of external influence. For example the debate on the invention of iron metallurgy in Africa remains unsettled. And it took several decades before Africans were credited for the construction of the Great Zimbabwe stone architecture .

The evidence shows that the region was not just a consumer of glass made elsewhere but also contributed to technological development, innovation and creativity. It also suggests that glass beads were mass-produced at Ile-Ife and traded as prestige items.

The first evidence of glass made by humans dates to 2,500 BC. Globally, archaeologically known centres of primary glass production are few and concentrated in the Middle East, Mediterranean and Levant.

When investigating ancient glass making, archaeologists look for furnace remains, tools, finished objects, production waste, and presence or availability of raw materials. To complicate the matter, glass production does not generate much waste because failed products, scrapings, or droppings are added to and melted with the next batch. But sometimes archaeologists are fortunate to have more than one form of material relating to glass production to work with. This was the case at Ile-Ife, where my research on indigenous glass making has been going on for nearly a decade.

Over the years, we focused on a site called Igbo-Olokun , where evidence of a glass workshop had been known for over a century but never studied in detail. We also studied archaeological materials stored in the Natural History Museum at Obafemi Awolowo University in Ile-Ife.

The findings from the archaeological excavations at Ile-Ife include several pits that appeared to be furnace ruins, over 20,000 glass beads, 1,500 crucible fragments (ceramic vessels used in glass production), and several kilograms of glass waste. Another artifact from the site is semi-finished glass , which is the object of study of my recently published work . Semi-finished glass is a halfway vitrified glass. The raw materials for the glass have coagulated but not yet turned completely into glass.

Laboratory analysis of this material with my colleagues Professor Thilo Rehren and Dr Laura Dussubieux provided a better understanding of the chemical signature of the glass . We could determine the source and types of the raw materials used, and decipher the technological process.

Results of the analysis show that Ile-Ife glass is chemically distinctive. It is now referred to as high lime high alumina (HLHA) glass – not known from anywhere else in the world.

What this tells us

The Ile-Ife site is the first known primary glass workshop in sub-Saharan Africa. Like their counterparts in other parts of the world, the glass makers at Ile-Ife explored the raw materials – geological and forest resources – that were available in the area. The concentration of the elements of the glass is consistent with that of the geological components in the region, which suggests that the glass makers invented their own glass recipe using the available resources.

The glass makers in ancient Ile-Ife used feldspar-rich granitic sand and/or pegmatite as the source of silica. They also used snail shell, which would have helped to reduce the melting temperature of the silicate materials and improve the quality of the glass. The quality was as good as glasses from other ancient societies.

Besides telling us how sophisticated this technology was, the research also tells us more about the role of West African forest communities in early regional commercial networks. We have established that bead was the main product manufactured at the workshop in Ile-Ife. It appears to have been produced in large quantities for trade . This means Ile-Ife was a producer and supplier of prestige items .

It is known from the archaeological evidence that sub-Saharan Africa was entwined in global connection through importing items like glass beads as far back as 600-400 BC . But this luxury item was also available within the region a thousand years ago.

Africans patronised the local sources, circulating and consuming locally made items. Ile-Ife HLHA glass beads have been found in early West African trading towns and cities such as Gao and Essouk in what is now Mali, and among the glass beads used to adorn the elite burial at Igbo Ukwu in eastern Nigeria.

This research has illuminated an aspect of Africa's past that is often misrepresented or completely obliterated. Africa has always contributed to global technological breakthroughs and economic systems. The continent has an untold history of creativity.

Abidemi Babatunde Babalola is the Smuts Research Fellow at the Center of African Studies, University of Cambridge. He receives funding from the Corning Museum of Glass, Rice University, Harvard University, UCL Qatar, A.G. Leventis Foundation, McDonald Institute of Archaeological Research, Cambridge-Africa Alborada, and Association of the History of Glass.