The Hand Of God Is Against Akufo-Addo's Second Bid 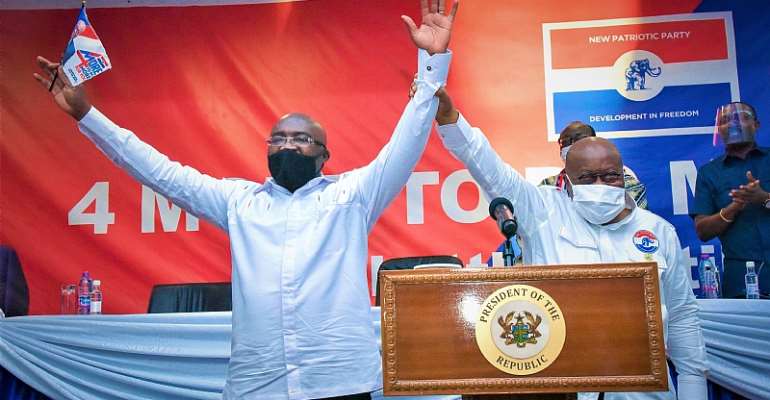 Folks, I'm going to give you an interesting account of the Titanic disaster. Please don't stop half-way, continue reading to the end. This article promises to be one of the most insightful of all my write-ups, it is supposed to point out the futility and the mystery of life - that nothing is certain - that anything at all can happen to anybody at any time; and so, there is the need to be humble and truthful.

I want to begin with a tad of preaching: God abhors arrogance and lies. The following quotations in the Bible will help strengthen my point.

2 Chronicles 7: 14 "If my people who are called by my name humble themselves and pray and seek my face and turn from their wicked ways, then I will hear from Heaven and will forgive their sin and heal their land."

Psalm 18:27 "For you save a humble people, but the haughty eyes you bring down."

Proverbs 11:2 "When pride comes, then comes disgrace, but with the humble is wisdom."

Proverbs 12:22 "Lying lips are an abomination to the Lord, but those who act faithfully are his delight."

Proverbs 19:9 "A false witness will not go unpunished, and he who tells lies will perish."

Now let me tell you something about the Titanic ship and the mystery about her sinking. Titanic was the largest moving object ever built by the hands of men in the early 20th century. She was about three football fields long and 11 stories high, and was able to carry an impressive 3,547 passengers and crew.

Another tidbit of interest is that the Titanic had some very admirable stats, features and luxuries. $7.5 million was used to build her in 1912. By today's standards it would cost roughly $400 million. Her launch was witnessed by more than 100,000 people.

Surprisingly, the name of the Titanic typifies arrogance. According to Greek mythology, the Titans were a race of giants with extraordinary power. But, they were boundlessly arrogant and plotted to overthrow the gods (Zeus, etc.) For this, they were punished by the gods by being thrown into the depths of the Tartarus (a mythological hell).

As her name may suggest it was believed that the Titanic was unsinkable and invincible, and that it had watertight compartments which can keep the vessel afloat if anything goes wrong. One person is reported to have asked a baggage porter when boarding the Titanic, "Is this ship really nonsinkable?"

"Oh yes mum. God Himself could not sink this ship," was the man's quick reply.

When news of the Titanic disaster began to reach the United States, it was reported that Philip Franklin, the Vice President of White Star Line, the company which built and owned the ship, stated unequivocally, "We place complete confidence in this vessel. We believe that she is unsinkable and nothing but inconvenience will be suffered by the passengers."

After learning that Titanic did indeed founder, Franklin persisted, "I thought her unsinkable and I based my opinion on the best expert advice."

On Monday, April 15, 1912, Titanic hit an iceberg in the Atlantic Ocean, and completely sank within some hours with a terrible loss of life. The final total of survivors was 706 and 1,502 were lost. There are life lessons to be gleaned from the story of Titanic - it pays to be humble: and also it is only God who controls the future.

Against this background, when I hear people arrogating to themselves an attribute of God by calling their security guards Invincible Forces (invincible means impossible to defeat or prevent from doing what is intended.); when I see people throwing their weights about and boasting that they will win elections at all costs, I feel very sad.

Akufo-Addo and his party lied their way to power, something God abhors. Truth and deceit can never dwell in one house because truth has powerful forces on its side, and anyone who trades in falsehood or makes spurious promises will definitely be exposed; and this is exactly what is happening to the Akufo-Addo led government.

In all these, it wouldn't be too much to say that the hope of the people of Ghana have completely petered out, and Ghanaians are extremely disappointed; and that these are valid reasons for them to regret their choice of a president. The electorate’s confidence in Akufo-Addo and the NPP seems to have an expiry date: 7th December, 2020.

When the Egyptians pursued the Israelites into the Red Sea, God caused the wheels of the Egyptian Chariots to fall off to frustrate the Egyptian soldiers. In the end, they all got drowned. This is precisely the case of my uncle, Nana Addo and his government. The desperate skirmishes to stay in power at all costs, and the subsequent frustrations by natural and other causes are a clear indication that the hand of God is strongly against them because He hates arrogance and lies.