On The Teachings Of Avraham Ben Moshe, Ghana’s Intellectual Messiah. 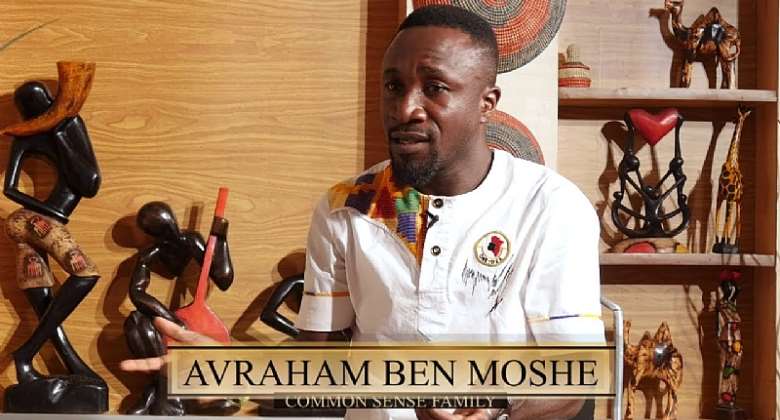 One can simply view a substantial portion of the teachings of Avraham Ben Moshe, leader of the Common Sense Family, as the kinds of intellectual gold nuggets which the country can do well to incorporate in its educational curriculum.

This is because what we need as a people are analytical skills and critical tools that will give us access to the knowledge of the good and bad, the useful and the useless, the fraudulent and the genuine, the real and the hallucinatory……. The power to discriminate intelligence from prestidigitation and common truth from sleight of hand. Because if we miss even one type of this world’s concatenation of deceptions, we will become mincemeat to the predators lurking all around us.

For this country is replete with religious and cultural masqueraders and raconteurs; and grandmasters of trickery abound to take advantage of the masses as high priests, prophets, ministers, apostles, bishops, overseers, hydromancers, necromancers and clairvoyants whose modus operandi is to defraud the citizens, to create the hokum of spiritual power, and to lead the whole nation astray. And of all these men of God and spiritualists and mountebanks and impersonators, and impostors, we have taken care to make no exceptions here because we believe in none and recognize none as a man or woman of God. God has spoken to none and chosen none. And this applies to the beginning of time till date. No God has ever spoken to anybody because no God exists anywhere at any time. And all these pretenders know this for a fact.

And Avraham Ben Moshe is not afraid to expose the charlatanry and fakery and trickery and hypocrisy and lies of all these congenital liars and parasites and magicians and tricksters who, if left unchecked, will definitely lead this country into extinction. He has succeeded in rubbishing the Bible as the word of God. He has made mincemeat of the doctrines of Christ and his supposed messianic mission and eventual sacrifice on the cross to save mankind. He has questioned the anthropomorphic emotions of God as detailed in both the Quran and the Bible.

He has interrogated and exposed the tricks of these so-called men of God that have hypnotized persons in high places and led them totally discombobulated. He has questioned the usefulness of religion in general and its intellectual and logical utility and purpose in our time. Avraham Ben Moshe has been versatile and ubiquitous in his radical and novel approach to the question of our faith and belief, having challenged all these religious goons and impostors to civil debate and virtually defeated every one of them.

Those of us who greatly admire Ben Moshe are not trying to turn him into a saint. Indeed, if we have been using our brains enough, whatever he states should be obvious to us, the stuff that any ordinary thinker ought to discover on natural impulse. If our education and training have indeed trained us to think as they should, we should arrive at Avraham Ben Moshe’s notions of commonsense without any extraordinary effort.

If we had not been made to believe and have faith in fairy tales and myth and had taken care to read the so-called word of god with a modicum of elementary reasoning and logical analyses, we should get to the interpretive destination of Avraham Ben Moshe without exerting our minds in any extraordinary fashion. For whatever he says that resonates with us is already lodged in our subconsciousness, and he just prods our thinking to bring them forth just us any good educator should be able to do.

But our education has never taught us how to reason logically. It does not have the philosophical and critical foundations that will enable us to analyze texts objectively in order for us to understand basic principles of life. We are made to believe in every myth proffered to us as a testament of God. Meanwhile, this God has been presented to us in any form or every form or no form by those who have claimed knowledge and proximity and affinity with him. And they have killed, raped, stolen, cheated, destroyed and deceived others all in his name.

Since we agree to supplant reasoning and logic with faith and belief, we have incapacitated the mind and chosen the path of lobotomized idiots far worse than animals. Animals keep their sense of intelligence functioning all the time, and there is no time when they allow themselves to be led by others that claim to have supernatural powers. Those leaders of animals are well tested around the clock, and are eliminated whenever they can no longer use their strengths and instincts to preserve the group and make them thrive. In the human situation, it appears that we follow by faith and belief and drown in deception and self-abnegation even while we fail and diminish in life.

In order to survive as a species, we must jettison faith and belief in anything and everything, totally liberating ourselves from the iron clasp of religion. For all these notions and concepts and doctrines of religion simply exist to render us gullible and vulnerable and easy preys to these parasites and predators who claim to have seen God.

If you have been made to believe or have faith in anything simply because you think you have seen somebody perform some miracles, those miracles you have seen are all false, and are purposed to gain your trust and cheat you out of your money. The fact that you don’t understand how somebody performed a so-called supernatural act merely shows that you don’t understand much. But you are not alone in your ignorance because there are millions of magical tricks on earth which you can never understand if you were to live for a million years! Therefore don’t let your lack of understanding of an act mislead you to believe that these contrived acts are wrought by invocation of the supernatural.

Don’t be fooled: There is no God. There are no demons. There are no witches. There are no devils. There are no dwarfs. There are no spirits. None of these imaginary creatures who you have, from the beginning, considered as influencing your life, or controlling your destiny has ever existed anywhere or at any time. And if you have been truthful to yourself, you have never met any of these imaginary creatures in your life except in your dreams or when you re drunk or when walking in the dark or when you have fever. The meaning is that these things are not real; they are housed in your imagination on account of your state of mind and environment and culture, and they appear to you as and when your mind is making them up in the periods of your fantasy.

Don’t allow your periods of fantasies lead you to have faith in stuff and believe in stuff, so that you will easily become prey to the teeth of all these predators out there who want to exploit your vulnerabilities and fears in order to explain your fantasies to you and fleece you of your money and destroy your life and family.

And to me, this intelligent and cogent message is what Avraham Ben Moshe is struggling to teach. If he cuts to the chase and moves beyond his racist self-abnegating harangue against Blacks and Africans, his message will achieve international traction and universal authenticity. Because it is the truth!

He is really not an extraordinary personage per se, notwithstanding his self-aggrandizement or overflowing confidence, either in ordinary biblical or quranic analyses. He is not your typically humble or even disciplined person in the mold of reflective scholars and serene savants. But he has the courage and gravitas to speak truth to power. And because neither our education nor training nor culture nor religion nor upbringing has directed us in this trajectory of thinking and commonsense…..And because we are so devoid and deprived of the basic tools of analyses and reasoning or logic, Avraham Ben Moshe will continue to have a visceral space in our intellectual discourse and religious worldview.

He is the kind of person we need to wake us up from our mental stasis and senseless stupor.