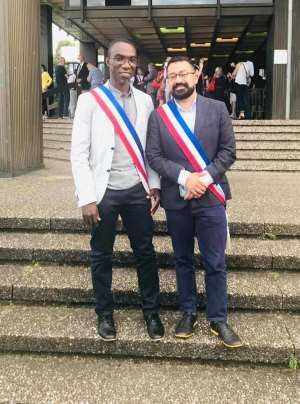 Mr. Owusu TUFUOR is the newly elected Deputy Mayor of the city. He won on the ticket of EUROPE ECOLOGIST, THE GREEN.

Mr. Owusu TUFUOR holds a Master of Arts degree in Public Administration as well as Post-Graduate Research work in Social Science and Conflict Resolution from the University of Strasbourg, France.

Mr. Owusu Tufuor is actively engaged in the daily political activities of his political party for the past decade in France.

Mr. Owusu Tufuor has been working for the past years as Head of Department in charge of Accommodation and Capacity building of the Youth in Strasbourg, France.

Mr. Owusu TUFUOR is also the President of the GHANA FRIENDSHIP ASSOCIATION OF STRASBOURG since 2016. He is a well-loved leader.

The entire Ghanaian Community in Strasbourg, in France, in Europe is really proud to have such a brilliant leader of Ghanaian descent to be democratically elected as DEPUTY MAYOR of STRASBOURG, the European capital.