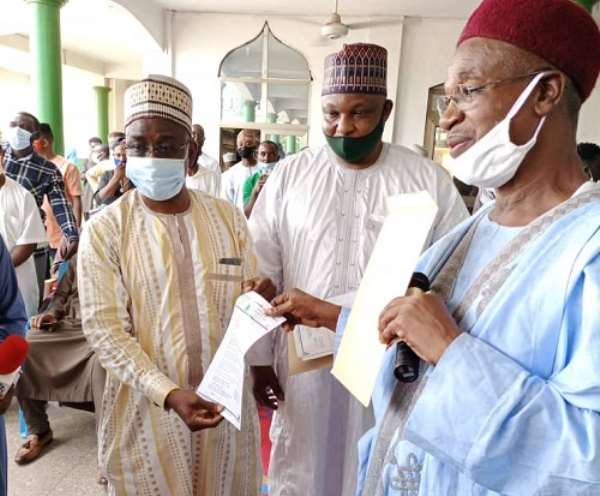 The Vice-President's gesture followed a request from the Islamic community in the Garden City which has one of the largest members of the faith in the country.

The GH¢120,000 accumulated lease arrears dating back to 1964 and the intense pressure on the custodians to pay up was a source of massive inconvenience to Muslims in the metropolis.

The donation was delivered on behalf of the Vice-President by Halidu Seidu, MCE for the Asokore Mampong Municipality in Kumasi, Dr. Abdul Rauf Ibrahim, Registrar of the Pharmacy Council and Alhaji Yunusa Osman to the leadership of the faith in Kumasi.

Until the Vice-President's intervention, access to the updated title of the facility was shaky.

If the leadership of the Islamic faith in Kumasi was surprised at the gesture, another stunned it when the MCE told them that the Vice-President had decided to undertake a renovation of the facility.

Expectedly they expressed gratitude to the Vice-President and prayed that God blessed him in all his endeavours.

Besides being a facility for prayers, the Kumasi Central Mosque, the leadership said, also serves as a place for social activities such as marriages among others.

It requested others to emulate the Vice-President's gesture, which it added, would go a long way in sustaining the facility.

They said Dr. Bawumia’s warm gesture would go a long way to help the management and sustenance of the mosque.

Kumasi is steeped in Islamic history of the Gold Coast, its centres of learning of the faith having been accessed by many Muslims in the country.

Islamic scholars were part of the Asantehene's palace at the peak of its power, recording proceedings in Arabic letters or Aljami. This is the principal source of the history of the kingdom.