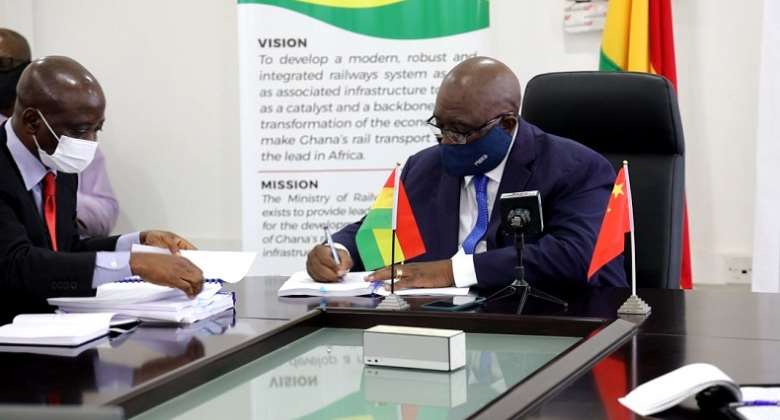 The Ministry of Railways Development has sealed a deal with DongFang Electric International Corporation for the supply of rolling stock and 35 standard gauge trains.

In a similar development, the Minister also signed a Memorandum of Understanding with TransTech, for the development of sections of the Western Rail Line from Huni Valley to Obuasi and from Dunkwa to Awaso.

In a short statement before signing the deal with the Chinese firm, the Minister said the agreement will see DongFang Electric International providing nine passenger locomotives with 4,500 horse-power and speed of 160 kilometers per hour.

According to him, the company will also provide 330 freight balance and also 11 shanty locomotives with a capacity of 1,000 horse-power, “so in all there will be 35 standard gauge trains which are being provided to us.”

He says all of Ghana’s old lines are narrow gauge, adding that the Accra to Nsawam line was constructed between 1910 and 1912 and that since 1912 the Nsawam track did not see major rehabilitation until 2018 under the Akufo-Addo Government.

He said the contract “is part of the total solution that we are giving the railway sector.”

He stated that the level of works that have been done under the Akufo-Addo Government over the last four years, no such works had been done in the sector in the past.

DongFang is a state-owned Chinese company which is involved in the supply of rolling stock.

According to him, the contract with TransTech is for the development of 183 kilometers of the line from Huni Valley to Obuasi on a Build, Operate and Transfer (BOT) basis.

The signing of the MoU, he says, does not restrain any other company from conducting feasibility study on the Western Rail Line.

He encouraged TransTech to work closely with the Ghana Railways Development Authority.