Tackling Inequality And Its Resultant Problem In The 21st Century 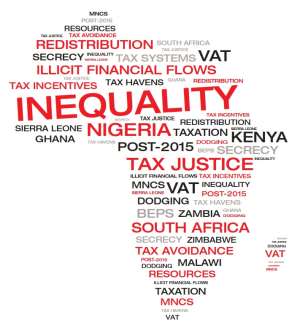 The world today is not fit for human existence due to gross inequalities and unwarranted discriminations, racism, nepotism, secularism, religious and ethnic sectionism, political partisanship, economic injustices, malign legal systems, destructive institutions, and the existence of so many uncivilized human traps set up by same human beings against fellows. As such, the world is filled up with hate, carnal killing of innocent souls, endemic extreme poverty and endless outbreak of diseases and sickness such as STIs, Infectious ailments, and untreatable viral diseases like Ebola and Coronaviruses. These and many others have robbed the dignity of individuals, lowed the standard of human living and curtailed development efforts of societies.

The subsistence and perpetuation of inequality is as old as the existence of human species especially ever since the upsurge in population of nations. In an ever globalizing world, the problem of inequality in all its forms is an identified global concern. From earliest times up to the 1960s, scholars including Dudley Seers and Amartya Sen had expressed concerns about inequality as a challenge to economic growth and sustainable development. Dudley Seers in 1960s and 70s described economic growth and development as a measurement based on a reduction in poverty, abridged inequality gap, and reduced unemployment. In the 1990s onwards, Amartya Sen described development as the existence of freedoms. Freedoms as used by Sen relates to the broadening of people’s choices in event of hunger, sickness, illiteracy, insecurity, mortification, voicelessness and subjection. Freedoms also encompass a reduction in deprivation and discrimination, the promotion of justice and fairness as well as easy access to socio-economic facilities, infrastructure and opportunities.

The incessant escalation of inequality in the world today can partly be blamed on the collapse of socialist and communist economies, and the speedy acceptance, adoption and practice of capitalist economic ideas and free market policies. The prevailing issues of globalization, privatization, and neocolonialism cannot be left out. Inequality in many modern societies is further accentuated by bad political and democratic leadership and institutional failure. Individuals and institutions tasked with the responsibility to fight inequalities in society are under-resources, weak, and less powerful, and in some cases, they are corrupt and gullible to greed and hypocrisy.

The consequences of inequalities are myriad. These include widespread and persistent economic breakdowns and financial crisis across the globe, increasing socio-economic vices, civil unrests, terrorism, and social depressions. Many research articles and reports revealed that, “worsening income and asset inequalities within and across countries are weakening the social and political fabric of our societies, fueling a downward cycle of economic, political and social uncertainty” (ILO 2013a). Furthermore, rising and persistent inequalities destroys economic fundamentals and harms the sustainable growth and development of countries in the world. At the micro level, inequalities reduce the productivity of labour and other assets of society. This implies many populations have less purchasing power and this ultimately affects aggregate demand and redistributive pressure, which may result to overall socio-economic insecurity of individuals and families, perpetuation of unemployment and continual stagnation.

The rising rate of inequality especially income and economic inequality is very alarming. The World Inequality Report (WIR) 2018 indicated that economic inequality “has increased in nearly all countries, but at different speeds”. The report said, “the global top 1% earners has captured twice as much as that growth as the 50% poorest individuals”. The report projected that income and wealth inequality alone will further increase by 2030, particularly if the “business as usual” continues. This situation is unacceptable and needs urgent attention from all citizens of the world. From my personal world view, eliminating inequality in all its forms is unachievable. But strategic stringent and efficacious strategies can reduce inequality to the barest minimal level, more particularly if dedicated collective and collaborative efforts are made. To tackle inequality in contemporary global society, three main solutions should be adopted. These are renaissance of societal morality, promotion of strong institutional and legal framework, and strengthening of social capital.

In 21st century societies, the moral fabrics especially the ethical and behavioral etiquette including the spiritual bonds had decayed, given way to secularism. In the past, morality was the defining principles for distinguishing what is right or wrong, good or bad, rewarding or punishable. Unfortunately, secularism has greatly destroyed the human bonds which were hold dearly and cherished in every society in the world. People have become more individualistic and self-centred; this breeds selfishness and gluttony in society. Hitherto, morality existed to create sanity and discipline in every segment of human life in society. From the teachings of morals, the rich are strongly encouraged and forced to give their excess wealth to help the poor and needy in society. With the existence of morality, there is inert desire for compassion, generosity, and kindness. Greed and extravagance is eschewed in a moral society, thereby creating room for less discrimination and inequality. For example, in the realm of Islamic morality, possession of wealth, properties and material things, high social status and power including having a family is regarded as a test and trial for man on earth, and the results of how one gets these enrichments and how one used them on earth would be seen in the afterlife. People in the realm of Islam believe that the sustenance and upkeep of the less privileged in society is kept in store with that of the rich. So, wealthy persons have a moral obligation to take care of the needs of the poor and needy in society. This basic moral teaching in this regard is moderation in life and strict avoidance of profligacy. I believe that the morality of moderation and charity is common in every cultural and moral society. Morality again prohibits the practice of discrimination against minorities, rather a collective responsibility in supporting people in need. The world therefore stands a better chance of reducing inequality and promoting a shared growth and development if the principle of moderation and prudence is renewed and promoted in every society and country in the world. This is possible through strict adherence to cultural and moral education and observance in each society; relentless moral advocacy; and promulgation of moral laws and moral justice.

The second surest solution to the problem of inequality in the 21st century is the existence of strong institutional and legal framework. The world at large needs vibrant institutions and potent legal systems to prevent and deal with inequalities anytime anywhere. The current situation is that, certain inequalities including gross human rights violations scattered across the globe are manned by thoughtless individuals and wicked groups, yet the few institutions available are very weak and lack the with-withal to deal with such activities. In a 21st century world that is so polarized with injustice and gross discrimination, the creation of sturdy institutions backed by compelling laws to deal with the problem of inequality and vulnerability is very paramount. For instance, income and economic inequalities can be minimized by establishing and practicing pro-poor financial and economic empowerment schemes run by legally strengthened and well-resourced financial institutions. Most of the financial, banking and micro-credit schemes in the world today are only poverty traps and perpetuate inequality in incomes and wealth. The world needs sustainably interest-free and pro-poor micro credit and banking schemes as in the case of Islamic banking models. Better still, the existing financial institutions can offer micro credits to the lower income earners at a reduced affordable interest rates, and probably tap good interest rate from the affluent persons. Also, the world needs robust institutions to deal with perpetrators of inequality such as bad political leaders, corrupt officials, criminals, fraudsters, terrorists, and all other persons or group of persons suspected of perpetuating vulnerabilities in any part of the world. These institutions should have unique intelligence, sufficient resources and the legal ability to detect, investigate, effect arrest, prosecute and control all manner of persons or groups of persons engaging in inequalities and activities unhealthy for human wellbeing, without any fear or favor irrespective of the culprits’ nationality, race, religion, social status, culture, or other socio-economic differentiation. The institutions should do their job with absolute justice and fairness, with the overarching goal of maintaining a decent world for all surviving humans. Until all countries have the courage to establish these vibrant institutions backed by effective legal systems, the fight against inequality will only be a mirage.

My last pivotal answer to the problem of inequality in the 21st century is the existence of social capital. We cannot do away with any form of inequality if our social connection is weak; no united bond, ineffective collaboration and partnership, abhorrence relationships, and lack of mutual support and collective action among and between all individuals, institutions and nations. Formidable social capital also include the availability of good socio-economic infrastructure and basic human services such as health care, potable drinking water, quality education, power, communication, transport, and livelihood opportunities easily accessible to all citizens of the world. The existence of social nets to specifically provide opportunity for vulnerable groups like the sick, people with disabilities, the aged, pregnant women and nursing mother, weak children as orphans, neglected kids and victims of disasters whether man-made or natural is very crucial for the realization of a fair world for all. Coupled with these, the creation of socio-economic opportunities such as employment, academic and professional development, upgrading of social status, and livelihood empowerment should be core mandate of every country’s government and institutions of trust. This was previously recommended by OECD that, “policies to boost jobs and growth must be designed to ensure fairness, efficiency, and inclusiveness” (OECD 2013a).

In a nutshell, inequality in all its forms exists based on the natural, political, and socio-economic environment and the global socio-political segregation aggravated by individualistic ideas from capitalist thinkers and duty failure by duty bearers. The current rampant socio-political instability, conflict, endemic poverty, malnutrition, vulnerabilities, irregular migration crisis, high rate of unemployment, increasing epidemics and pandemics, terrorism and overall, the persistent global economic and financial down turns and depression can all be blamed on the existence of inequality in all parts of the world. I must admit that, it would be a hectic effort to eliminate inequality completely from the world, but with the collective resolve from all global citizens, we can reduce inequality in all its forms to an acceptable level. Prudent solutions such as the renaissance of societal morality on moderation, charity, compassion and avoidance of extravagance; the establishment and strengthening of brawny institutions backed by potent legal system; and the strengthening and widening of social- economic capital can do magic for the world. In doing all these, we must change our thoughts towards one another from a negative light to a positive one. This big lesson was taught to us by the Prophet of Islam in 1400 years ago when Mohammad (peace be upon him) declared emphatically and unequivocally, “An Arab is NOT better than a Non-Arab neither is Non-Arab better than an Arab. And a Whiteman is NOT better than a Blackman neither is Blackman better than a Whiteman. The BEST among humanity is One who is God-Fearing, Kind Hearted And Righteous”.