Battles over Barley: Australia, China and the Tariff Wars 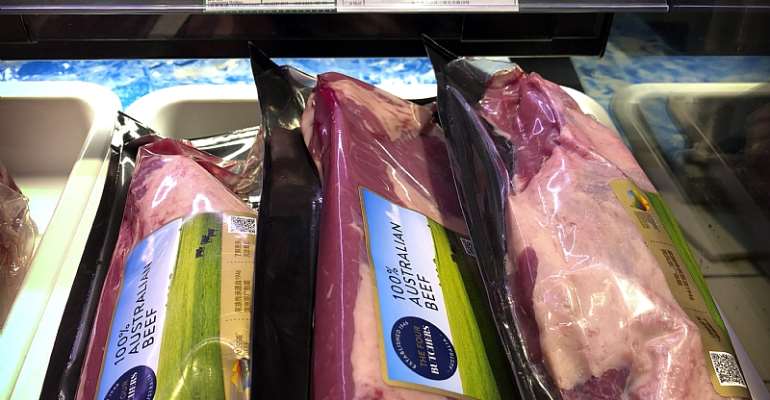 Packages of beef imported from Australia are on sale at a supermarket in Beijing, Friday, May 15, 2020. - www.voanews.com

It promised to be bruising to both dignity and wallet. However brazen Australian politicians have been drumming up support for an international inquiry into the origins of the novel coronavirus, the first ones to be slapped in anger would have to be those in agriculture. Barley exporters find themselves facing a suffocating, and potentially market killing tariff, of 80.5 percent. This Chinese tariff, as things stand, is set to be in place for five years. As the PRC accounts for half of Australia’s barley exports (worth $A600 million in 2019), the losses promise to be far from negligible.

The official explanation from China’s Ministry of Commerce was dry but damning. “The Ministry of Commerce conducted an investigation in strict accordance with China’s relevant laws and regulations.” The country’s own “domestic industry had suffered substantial damage” arising from subsidised Australian barley being sold in the country at below the cost of production; the measure, in effect, comprised an anti-dumping component (73.6 percent) with the rest made up by an anti-subsidy.

Even before the measure, there were murmurings from PRC officials that evidence showing that barley had been “dumped” on the Chinese market by Australian farmers was scant. Nevertheless, investigations were initiated in November 2018. Beijing wished to teach Canberra a lesson. Australian exporters, members of industry and government submissions were duly made to MOFCOM seeking to rebut any claims of dumping, arguing that their “grain industry operates in an open, commercial and competitive global market”. No countervailing subsidies were provided to Australian farmers, and exports sales were “made at values above the purchase price offered to growers, which is in turn above their cost of production”.

The outcome seemed pre-ordained. Officially, Australia remains a near fanatical devotee of open agricultural markets, touting free-trade with uncritical, newborn enthusiasm. (In a time of insular trade policies crowned by the US-China trade war, such a view seems charmingly anachronistic.) Other reasons were seen to be at play. Prior to the investigation, the PRC had watched Australian moves to muscle in on the supply of undersea internet cables between Australia, Papua New Guinea and the Solomon Islands. Beijing had initially tickled the interest of the Solomon Islands in doing the same, using its communications company Huawei as the potential provider.

But minds were duly changed; Canberra’s offer, outlined in its Memorandum of Understanding of July 11, 2018, was too good to refuse, despite Australia’s record on internet speeds being, to put it mildly, abysmal. As Australia’s then Prime Minister, Malcolm Turnbull, explained, “We spend billions of dollars a year in foreign aid, and this is a very practical way of investing in the future economic growth of our neighbours in the Pacific.” It was also a very practical way of shutting the door on Huawei as the conscience of charity was placated back in Australia.

The PRC subsequently noted the enthusiastic pledge by US Vice President Mike Pence that his country would work closely with Australia and Papua New Guinea to expand the Lombrum naval base on Manus Island to accommodate Australian guardian-class patrol boats. The base offered promise as yet another US-friendly port to project power. The announcement heralding the investigation came a few days later. The pundits wondered: startling coincidence, or punitive agricultural politics?

Beijing’s methods of economic retribution against those it finds fault with often avoid a dagger-in-the-front approach. Violations of the internal rule-book and regulations is preferable to a formal acknowledgment of punishment for a foreign policy disagreement. In 2017, South Korean conglomerate Lotte faced the closure of 74 of its 112 China-based supermarkets in apparent retaliation for Seoul’s installation of the US-backed Terminal High Altitude Area Defence (THAAD) missile defence system. Lotte also seemed a plausible target, given its role in signing a deal suppling the ROK’s Defence Ministry with the land upon which to install the missile batteries.

The PRC also has another card to draw upon. Australia, that self-described paragon of free trade, has been unhesitant in deploying its own economic retaliations ostensibly to protect local industries Canberra claims have been injured. These take the form of anti-dumping and countervailing measures, both of which result in additional duties. Even the World Trade Organization permits their use in cases of material injury, provided there is a causal link between the damage and the act of dumping. Those deemed deserving of such treatment by Australian officials find their way onto the Dumping Commodity Register. The current list is impressively long, featuring extant tariffs or ongoing inquiries into imposing them on Chinese wind towers, A4 Copy paper, aluminium zinc coated steel, ammonium nitrate, clear float glass, PVC flat electric cables and railway wheels. The list goes on and includes, it should also be said, numerous other states.

Behind the shrill calls of the free-trade enthusiasts lies a qualifying hypocrisy, with a general acceptance that such rules shield, according to international trade academic Simon Lacey, “Australian import-competing industries from the full and potentially crushing impact of free trade with China.” But the Australian Productivity Commission thinks otherwise, arguing that there are “no convincing justifications for these measures, and they reduce the wellbeing of the Australian community.”

The wounding consequences of China’s barley play have been acknowledged by Australia’s farmers and certain politicians. In the rueful words of the Western Australian Agriculture and Food Minister Alannah MacTiernan, “These tariffs effectively close WA’s largest barley export market and could result in a direct loss of up to $200 million to Western Australian farm incomes this coming year from reduced barley values and reduced wheat prices, as more farmers turn to wheat crops.” The barley growers of the state had “been caught up in a much larger issue.”

A joint statement from the Grains Industry Market Access Forum, Australian Grain Exporters Council, GrainGrowers, Grain Producers Australia and Grain Trade Australia did not shy away from the scale of the decision. “For a number of years China has been Australia’s largest barley export market and Australia is the largest supplier of barley to China.” The duty rendered Australian barley uncompetitive in the Chinese market.

The federal agricultural minister, David Littleproud, resists any suggestion that the barley wars are part of a broader trade conflict, or that the decision was linked to Canberra’s zealous pursuit of an independent COVID-19 inquiry. Local producers, and the Australian public in general, have to be reassured that adventurism has not been the cause. “The reality is they are separate.” The investigations into Australian barley had “started 18 months ago, well before COVID-19 came into place and this was the juncture, coincidentally, of when it had to come to a decision.”

This view was not shared by former Australian foreign minister, Alexander Downer. Never one to let the plight of the wounded cloud his judgment, he was content that “we haven’t caved in and been bullied by [China] and we’ve got the investigation that we’ve wanted.”

This move in the barley market have pushed other exporters up the ranks. France, Canada, even Argentina, seem like candidates for malt barley; the Black Sea appeals for feed barley. Australia, for its part, is considering the WTO for redress, something it did to India over claims of sugar subsidies. (That process grinds on in interminable slowness.) “China, we think in this case, has made errors of fact and law,” claims trade minister Simon Birmingham. But the hefty elephant in the room remains Canberra’s willingness to storm Beijing’s barricades on behalf of its chief security sponsor. This is coming across more as an act of misguided allegiance than valiant heroism.

Feature Article
Powered By Modern Ghana
Gratitude To Those Who Made The Third Republic Possible
Upset By The Bleak Of Politics
The Law On Corporal Punishment (canning) Parental Control In Ghana
Rescue Mission for the “Witches” of Gonjaland, Maybe?
Agyapa Deal Must Not Be Cast in Stone
Assange’s Twelfth Day at the Old Bailey: Autism, Suicide and Prisons
Dream Big!
Kwamena Ahwoi’s Working With Rawlings – Amidu’s Critique V: A Sequel
A Quick Note To Mr. Dennis - Who Claims To Be Part Of The Leadership Of Camp Liberia's Refugee Community
COVID-19 Updates Live Dashboard
TOP STORIES