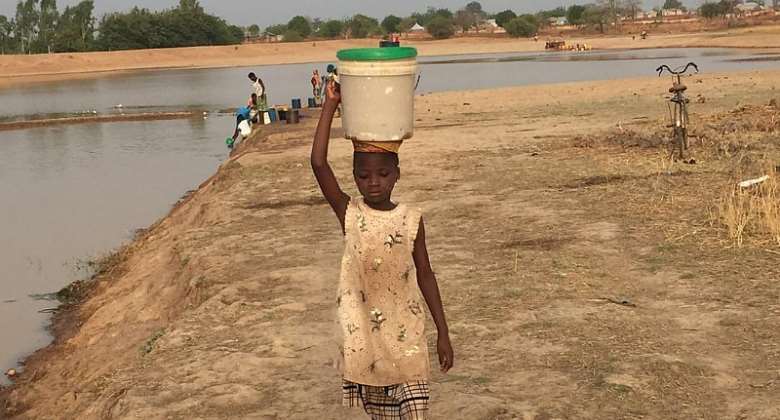 Water quality is a primary concern for all residents in the Tolon District, located in the Northern Region of Ghana. For several decades now, Tolon District could be described as one of the poorest places in terms of water quality and accessibility to clean drinking water. No doubt, it has contributed, in parts, to the record failures in the academic and vocational pursuits.

Parents in the district and workers are faced with this deadly dilemma (unsafe drinking water) every day. Throughout the whole Tolon District, a lack of clean water is consistently one of the deadliest killers of children. Waterborne illnesses spread by unsafe drinking water can lead to a number of complications that can kill even strong adults within days. Small children are even more vulnerable.

The target task of the Millennium Development Goal (MDG) 7.C was to halve the number of the population with no access to safe drinking water and basic sanitary facilities by the year 2015. Through implementing this target, the proportion of people who have access to a basic drinking water service grew from 81% to 89% from 2000 to 2015. However, a weakness of the MDGs monitoring was an insufficient attention to water safety, which became a key element of the target task for water supply and sanitation upon design of the Sustainable Development Goals (SDG 6).

According to the United Nations Resolution 64/292: “The human right to water entitles everyone to sufficient, safe, acceptable, physically accessible and affordable water for personal and domestic uses”. Therefore, SDG 6.1 call for full coverage of safely managed drinking water by 2030. The “Safely managed drinking water” indicator includes the three following conditions: accessible on premises, available when needed and free from contamination.

This goal is a huge challenge for all countries, not only for low- and middle-income ones. The commitment to “leave no one behind” requires a focus on rural areas, which is typically neglected. About 844 million people on Earth do still not have access to basic water supplies and 79% of them are rural residents. At the same time, 2.1 billion people have no safely managed drinking water supply system service. This means that 14.9% of the urban- and 45.2% of the rural population need improved services.

Tap water installed in villages by the government is not able to fully satisfy the populations’ drinking water demands. There had been some constant interruptions in the systems due to technical problems, which in turn worsened the quality of the supplied water.

Clean and safe drinking water is vital for human health and can reduce the burden of common illnesses, such as diarrheal disease, especially in young children. Unfortunately, in 2010, it was estimated that 1.8 billion people globally drank water that was not safe. This scenario is most common in developing countries, and the problem is exacerbated in rural areas. Significant amounts of time are spent by adults and school children upon water abstraction from various sources. It is estimated that, in developing countries, women (64%) and girls (8%) spend billions of hours a year collecting water. The erratic supply of safe drinking and domestic water often affects good hygiene practices. In most developing countries of the world, inadequate supplies of drinking water can contribute to the underage death of children in the region.

Storage of collected water from rivers, springs, community stand-pipes, and boreholes is a common practice in communities that lack potable water supplies piped into their homes. Even when water is piped into the home, it is often not available on a continuous basis, and water storage is still necessary. Water is stored in various containers which include jerry cans, buckets, drums, basins and local pots. It has been reported that when collection of water from sources of high quality is possible, contamination during transport, handling and storage and poor hygienic practices often results and can cause poor health outcomes.

The State of Water Situation in Tolon.

It is said that water is life and we are never too old to treat water like gold. The water situation in Tolon has reached a point that animals don’t even feel save consuming the liquid substance that keeps us alive.

It must be put on record that the main source of water for Tolon, a district capital, is the good old dam located at the outskirts of the community, which has been serving the people for decades. This dam, not only serves the good people of Tolon but also, nearby communities like N-laalaa Yili, Vowagri and Yobzeri. The over-dependence on the good old dam which has been serving the people for decades has suffered a devastating effect so much such that it can no longer provide the people of Tolon and nearby communities with clean, portable and suitable water for human consumption.

A visit to the dam for an eye-saw kept me weeping as I could not believe the combination of what is been called water. The very dam that I fed on, washed my school uniform on every sundays, drink and shower, can no longer be recognised. Very unclean, brownish, muddy and thick as that of a matured sperm that could only be patronized by species without life. But what can the people do!? They are forced to drink, bath with it, cook with it and wash with it. They do not have any other source that is safe and reliable. The so-called pipe borne water, is only made accessible to the people once a week and this has left residents with no viable option to put their trust on, but the good old dam water (now very bad) which has no good future health prospects for inhabitants.

The residents/inhabitants in Tolon and nearby communities in the Tolon district are desperately in need of clean water. The people, for now, can boast of smelly, dirty water for all activities, leading to diseases and deaths. It is appalling seeing young and energetic youth being dragged helplessly to the hospital with the simple outcome related to cholera and unsafe water consumption. How can we allow our dear youth, with brighter vision for mother Ghana die helplessly like chicks?

Fellow Ghanaians, one of your own blood sister, brother, uncle and father is in dire need of portable drinking water. The community (Tolon) now lives in a state of anarchy where there is a war between humans and animals. The dam, which residents have no choice than to value it, is now a breeding ground for insects. Hardly could you fetch water without having to struggle with frogs, toads and other animals in the water. Their (animals) claim of having ownership of the muddy and smelly water over the residents cannot be disputed because they have made the water looks conducive to their stay but however unpalatable for human consumption.

In the search for clean water, many residents prefer to add alum and as well boil it before using it for any human activity. However, for those who are very much economically challenged and children with no source of income, such group have no option than to happily consume same with the hope that God will do the rest.

With the challenges that come with lack of access to safe and adequate water supply for residents in Tolon and surrounding communities, it has heavily contributed to the ongoing poverty level, through both the economic cost of poor health and the high proportion of household expenditure on water supply. There isn’t a day in the district without someone suffering from cholera or other unsafe water related diseases. This has left the poor subsistence farmer to sell his/her basic food produce meant to feed the family to settle health bills. At this stage, what then happens to the family and what better hope does the future of such residents in that mess holds?!

However, the authorities and government agencies of Tolon have made a serious omission from our progressive priorities as a people. If we truly want Tolon to shine as a beacon of development culture that has respect for the elderly, then we cannot allow people or residents living in Tolon and other communities to be treated like second-class citizens, without access to clean drinking water. If leadership cannot actually stand up to their duties as frontiers to community development, then our generational leaders have failed us.

It is disheartening and morally unconscionable that we have families living with contaminated water but hardly could they complain. Simply because everything has now been zeroed to politics. This shouldn’t be the generational citizens and leaders that must be upheld. We need to, as citizens or subjects, point out the generational leadership lapses and as well stand up to our responsibilities. As humans, we cannot survive, let alone thrive, without water. Tolon and its environs deserve clean water that is safe to use and safe to drink.

We need your help to bring clean drinking water to impoverished Tolon that for too long have watched her children needlessly suffer due to a lack of life’s most basic necessity.