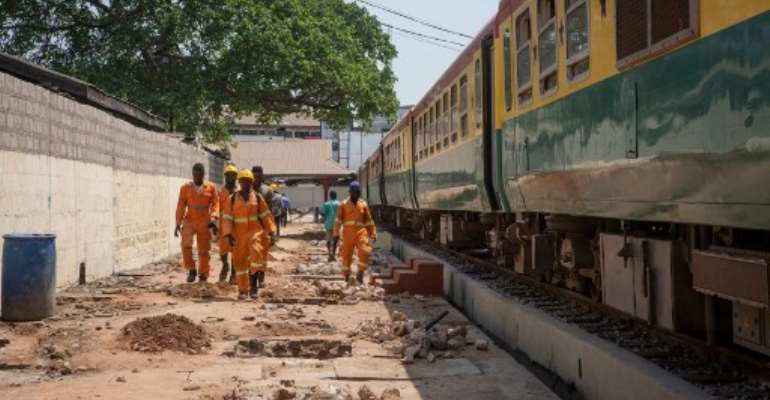 Maintenance staff walk along the railway line that connects the Ghanaian capital Accra and the city of Tema. The 25-kilometer route reopened in late January 2020 after rehabilitation.

The government of Ghana believes that investment in railway infrastructure will put the country on the fast track to economic development.

Construction on the first railway line in Ghana started in 1898 when the country was under British colonial rule. The line—between Tarkwa, a gold-mining center, and Sekondi on the coast—opened in 1901, and in the next two years, it was extended north from Tarkwa to Kumasi, the capital of the Ashanti region.

When Ghana gained independence in 1957, it had a rail network of nearly 1,000 kilometers, but today only about a sixth of it remains in operation. Derailments and slow speeds are a common occurrence.

In December 2013, the government of Ghana released a railway master plan, setting out six phases of development. Targets included the rehabilitation of the existing narrow-gauge network, and the construction of new lines—built to standard-gauge specification—to link all regional capitals and ultimately connect Ghana with its neighbors, Côte d’Ivoire, Burkina Faso, and Togo. This would add more than 4,000 kilometers of track to the network, at a projected cost of US$23 billion.

The plan has received the support of successive administrations.

The first phase of the plan involved completing priority projects over a four-year period from July 2016 to July 2020. The rehabilitation of the line between Accra and the Port of Tema has been completed, and the route reopened in January with a passenger service for 600 people. The line also links free zones in the area to the seaport, with some facilities specifically designed to take advantage of the railway link between the two cities.

The Takoradi–Tarkwa line is currently in development.

Earlier this year, South African state-owned rail and freight operator Transnet signed an agreement with the GRDA and the GRCL to develop a 66-kilometer standard-gauge railway line alongside the existing line in the Western region, between Takoradi and Tarkwa. The line is crucial for transporting freight, mostly for the mining and agriculture sectors.

Not all of the key investment in Ghana’s railway service has come from the government. Private sector initiatives, such as the completion of the first domestic facility for the production of concrete railway sleepers (as opposed to wooden sleepers) suggest that private companies are positioning themselves to take advantage of the railway boom.

Additional financing sourced through build-own-operate-transfer agreements, barter agreements, and public-private partnerships are integral to the success of the plan, says Richard Dombo, CEO of the GRDA. There has also been a considerable international appetite for rail investment in the country. They have had discussions, for example, with steel producer ArcelorMittal about the right to extract iron ore at Sheini to a value equal to the cost of constructing a rail link between the mine and the coast for exporting the ore.

Ghana’s railway lines have historically been “engines of growth”, Dombo says, and the transport sector remains crucial for future development.