Fenêtre(s): documentary captures the intimate side of life under lockdown in Paris 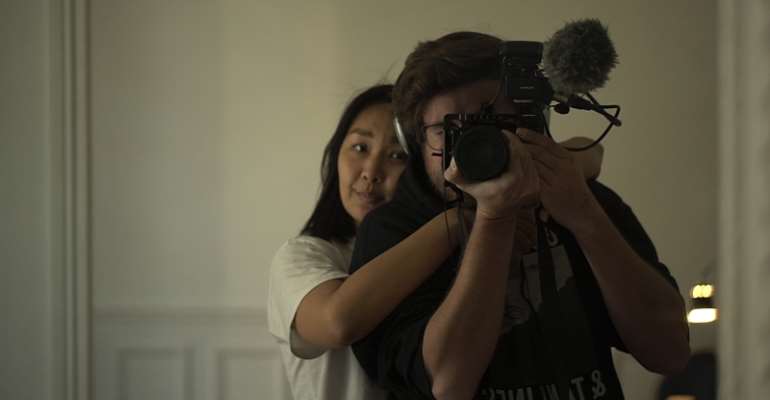 France is about to emerge from lockdown after eight long weeks. During that time French filmmaker Louis Villers turned the camera on himself, his girlfriend, friends and family, capturing daily life - often in his pyjamas - from the confines of his Paris flat. It became a weekly documentary aptly titled Fenêtre(s) (Window(s)).

Every day for two months Villers and his partner Jiawa Liu connected with friends and family via video link, making a log book in real time of the experience of living through lockdown. Every Saturday for eight weeks a 26-minute episode was broadcast on Canal Plus TV. Villers and Liu talked to Spotlight on France about this unique  experience. This is an edited version of the interview,. Listen to the audio version here.

RFI: How did the documentary Fenêtre(s) come about?

Villers: I was with Jaiwa at home knowing we were going to live through a historical moment. We didn't know where we were going with this film, but we knew we had to start filming at the beginning of confinement because this experience was going to change a lot of things for us personally and for friends and for the world.  We knew it would be interesting to keep a record of us changing and of our questions during these two months.

RFI: You didn't know at that time that it might end up becoming eight episodes broadcast every Saturday on Canal plus, one of the biggest private TV channels in France?

Villers:  When Emmanuel Macron first talked he said 'you will be in confinement for two weeks'. We didn't know it was going to last two months! So it started very simply. We just wanted to post one video on YouTube every day to capture the kinds of questions we were asking ourselves at that precise moment.

RFI: As a documentary film maker who's travelled the world and is used to being in wide-open spaces, you now find yourself filming in a small flat in Paris. What were the main challenges you faced?

Villers: It was easy in the first days to film what was happening because  everything we saw in the street was completely new: the lockdown, all the shops closed, the first policemen who arrested people because they didn't have their certificate to go to to the boulangerie. We shot everything from our balcony.

RFI: Has Making this documentary changed the way that you see Paris?

Liu: This experience has made me realise even more deeply what it is that makes Paris Paris.  It's actually people and what you see when you go outside: what people do, what they wear, how they behave. Even if you know all the scenery is still there,  without the people it's not Paris.

Villers: It's the first time I've observed Paris so much, but actually I'm just observing Avenue Saint Ouen! I recognise the people, how often they go to the boulangerie, how often they need to go and buy a bottle of wine.

RFI: In the documentary you speak to friends and relatives via video link. We meet family members who are nurses and doctors who talk about the difficulties of working in intensive care; your aging grandmothers who talk about feeling isolated, friends who work with the homeless, a priest who talks about people not being able to visit elderly relatives, losing loved ones...

Villers: I think this period of confinement was a great opportunity for everyone to pick up their phone and call people. I never had so many phone and video calls as during this period and I think it's the same for most French people and people in the world.

Liu: We're not really getting news about the global situation through the news because every country is focused on itself. So it's actually through family and friends and other connections that we're getting an idea of just how global this is.

RFI: As a young Australian-Chinese woman, how do you think the French have been dealing with confinement ?

Liu: I was very interested in this from the very beginning. I think it was in January that the news started to become quite widespread that Wuhan was having an epidemic. I work in fashion and I was in Milan and I left the day after they had those 10 cases in the city in Lombardio. So that was extremely close to home and what I observed was that there was just no reaction in France. I felt very concerned but the people around me were not concerned.

I grew up in China and left when I was 10.  We had, and still have, a lot of the diseases that have already been eradicated in the West. So from a very young age I have a trigger in my mind that you don't want to catch infectious diseases.  But I think that perhaps in more wealthy countries like France there's just not that culture.

RFI:  What has changed since you started filming daily life under lockdown here in Paris?

Villers:  I think we need to be at the end of lockdown to know exactly what the main changes will be. I'm wondering how I will go to my office, what it will be like in the metro, how I will greet people. Little things like that. We will see deeper changes in our society, of course, but it's hard to know for the moment.

Liu: The psychological change was quite immediate. From the first day after shutdown there was a feeling that being next to someone was a taboo, you didn't want to even brush against someone on the street if they weren't wearing a mask. This was only a few days after we were all being quite nonchalant and going outside kissing cheeks.

RFI: The French hug and kiss a lot. We're clearly out of the habit. I wonder if it will come back quickly or not.

Liu: I don't think people will want to.
Villers: But you never know. The main question my friends and family are asking, and me too, is maybe it will come back exactly like before and very quickly. Maybe we won't kiss in May or in June but maybe in September.

RFI: What have been the highs and the lows for you during lockdown?

Liu: The high point for me is definitely being able to spend so much time together.

I did have some hard days but I'm not sure it was to do with confinement. When they announced we would come out of lockdown on 11th of May I had this feeling, almost like a fear of coming out, that life might return to the way it was before which was just so crazy.

RFI: One of your friends, Arnaud, holds the world record for freediving. In the documentary he speaks in a very poetic way about going deep down into the sea, that we're all underwater now and we don't know what it's going to be like when we come to the surface, what will have changed and so on.

Villers: What he says is beautiful and reflects what French people are thinking: that this confinement period was a great opportunity for us to think of another way to live, to think about time and space and how we can eat and consume differently.

Liu: Arnaud talks about going down deep as a learning experience, for us to realise that we can choose to take something from it when we come back up again.

Villers: That's why I wanted to record all these questions and reflections. It will be interesting to watch them again, later, to see if we actually did change or not.

And listen to the 38 episodes of Spotlight on France podcast here!