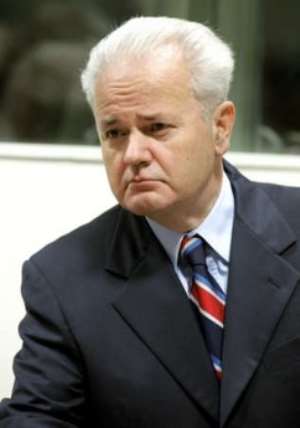 The Hague Tribunal's final verdict on Slobodan Milosevic's death has concluded that he was not poisoned and there was no foul play involved. Imagine my shock. The truth is that the circumstances of Milosevic's death and why it had to happen prove foul play even absent allegations of poisoning.

How can an investigation that, if evidence of murder was uncovered, would result in criminals charges for the investigators themselves be impartial?

The BBC reported on the nature of Milosevic's death,

"Guards knocked on his door for an 0900 wake-up, but assumed he was still sleeping and left him alone until 1000 when they saw "that he was still lying on his bed".

"As he approached the bed he saw that Mr Milosevic's face was greyish in colour and that his arm was hanging over the side of the bed," says the report.

The guards tried to find a pulse, but realised the prisoner was dead."

Milosevic's prison cell was under 24 hour video surveillance. At first the UN ridiculously claimed he had poisoned himself by having someone smuggle in drugs past armed guards before changing their story to a heart attack. If Milosevic had died of a sudden heart attack surely his reaction to it would be captured on the tape. All the UN had to do was show the Dutch authorities the tape and no investigation would have even been necessary.

Heart attacks are not usually considered a subtle and quiet way to die. The symptoms are chest pain, discomfort, sweating, weakness, nausea and vomiting. Are we really expected to believe Milosevic experienced all this while remaining in a peaceful sleep and without his watchers noticing?

"They kept cameras and lights on in Slobodan's cell non-stop, so that he could not sleep. That is an officially recognised form of torture," said Milosevic's wife.

The fact that Milosevic was under constant surveillance coupled with the total lack of response from medical personnel to his heart attack proves foul play in itself, absent of any allegations of poisoning.

Milosevic wrote a letter one day before his death claiming he was being poisoned to death in jail. The lawyer who advised Milosevic during his trial, Azdenko Tomanovic, showed journalists a handwritten letter in which Milosevic wrote: "They would like to poison me. I'm seriously concerned and worried."

Milosevic's trial was coming to an end and the only verifiable evidence to emerge from it was proof that the real Butcher's of Serbia were Wes Clark and Bill Clinton. The US government's financial and military support of Al-Qaeda, after the embassy bombings, was also being exposed.

The Globalists have wanted to eliminate Milosevic for a long time. Former MI6 agent Richard Tomlinson said he saw documents in 1992 that discussed assassinating Milosevic by means of a staged car accident, where the driver would be blinded by a flash of light and remote controlled brake failure enacted to cause the crash. This exact same technique was utilized for real in the murder of Princess Diana.

The illegal Clinton-NATO bombing of Serbia was fueled in part by a staged ITN news report purporting to show evidence of a Bosnian Serb death camp. Pictures of emaciated 'prisoners' behind a barbed wire fence were used to claim the Serbians were running internment camps. In reality the emaciated man was a tuberculosis victim and the film screw were the ones inside he barbed wire enclosure, filming out to refugees who had willingly entered the refugee camp.

Milosevic, just like Saddam Hussein when his testimony was shut off after he discussed the US' role in staging bombings in Iraq, had to be silenced and the trial prematurely aborted before its credibility completely collapsed.