Night of glitz, as African Movie Award holds in London 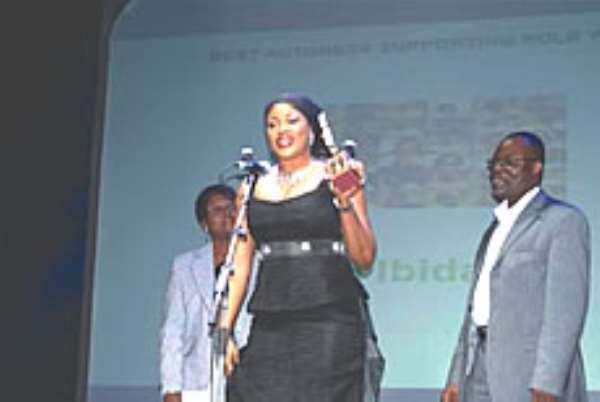 THE 13th Afrcan Film Awards formerly referred to as the Afro Hollywood awards, has come and gone, but the memories will linger on for a long time to come. The awards came barely eight days after the first African-American, Barack Obama, won the US presidential election. President-Elect Obama predicated his campaign message on change and hope.

According to him, the change we need and the change we believe in, are most important constructs that will now move the world forward.Perhaps, it was this change element that was pre-eminent in this year's African Film award ceremony, which took place on November 12, 2008.

First, the venue was changed from the traditional West End Hilton Hotel, where the award had always been held in the past. This year, the venue was at The 02 (indigO2), in North Greenwich, London, an unfamiliar terrain for black events. This did not, however, take away the glamour and glitz noted in the past of the event.

With the presence of film stars, politicians, musical artistes, entertainers e.t.c, the show can be regarded as a huge success. Ace comedian, Princess Adekoya, ably supported by veteran actress, Binta Ayo Mogaji-Oduleye, made the show lively with her hilarious comedy. Guests who attended the show attested to her ability to actually make people giggle and laugh at themselves. From the start to finish, it was a lively atmosphere and even the most serious-minded individual would have fallen under the anointing of laughter.

CEO of the African Film Awards, Mike Abiola, said the show had come of age and would like to thank those supporters of the awards who have made it a successful journey this far. Mike Abiola, who is also the publisher of the African Voice Newspaper, was full of praises for the talented artistes and arts patron who made this year's event despite the difficulties. For the umpteenth time, he informed the audience about the concept of the African film awards, which among other things, is to promote the image and culture of Africa and celebrate the growing film industry and showcase the achievements of the professionals. Abiola emphasised that the event presented a vehicle for corporate communication.

The awards ceremony was a huge success as more than 1,000 Londoners from all walks of life, thronged the magnificent 02 architectural edifice. By 8.30p.m, the venue had been besieged by enthusiastic fans who wanted to catch a glimpse of their screen idols, especially the Nigerian film stars whom they have watched in the Nigerian home videos.

In recent times, the Nigeria movie industry has become very popular in western countries and film stars have become household idols. The popularity of the likes of Richard Mofe - Damijo (RMD), Desmond Elliott, Bob Manuel Udokwu, Ramsey Nouah, Patience Ozokwor, Liz Benson, and producers such as Tunde Kelani, Tunji Bamishigbin and a host of other talented personalities in the film industry, testifies to the fact that the Nigerian movie industry is in a class of its own and has come of age.

This year's awards featured an array of musical stars, such as Olu Maintain, May 7, Komoblastic, Mr Solek and the latest wave-making gospel music sensation, Caleb Alalade. All the entertainers at the event put up electrifying performances.

The highlight of the evening came when Olu Maintain created the scintillating atmosphere that wooed the audience. About two months ago, Olu Maintain, brought the former US Secretary of State, Colin Powell, on stage to dance to his Yahoozee music at the Royal Albert Hall, during the African Arise Festival. But this time round, Olu Maintain (full name Olumide Edwards Adegbulu) also electrified the hall when he rocked the audience with his Yahoozee dance music, which rounded off the show. As the audience went berserk, one of his female fans joined him on a table dance just after the African music icon, was pronounced winner of the Most Promising African Musical Act.

Otunba Segun Runsewe, Director General of Nigeria Tourism Development Corporation (NTDC), was presented with an outstanding recognition award for the promotion of tourism in Nigeria.

Another outstanding award was presented to O-T Fagbenle, a RADA trained actor, who is recognised for his roles from Doctor Who, to Hollyoaks and Agatha Christies, Miss Marple etc. O-T Fagbenle burst onto the scene in a series of fantastic stage performances, performing in Romeo and Juliet, and as Mercutio in a national tour culminating at the Hong Kong Arts Festival. Later that year, he was awarded the M.E.N. Theatre award for best actor in a leading role in Six Degrees of Separation.

In October 2006, Fagbenle was greeted with critical acclaim for his performance in Trevor Nunn's Tony Award winning world premiere of Porgy and Bess The Musical. Following Cab Calloway in the opera and Sammy Davis Jr. in the feature film, O-T Fagbenle played the infamous role of Sportin' Life, at the Savoy Theatre in the West End of London.