Why Kokonte is Ghana’s Superfood

...Yeboah et al.(2019) study found that locally made kokonte has a glycemic index of 7, and groundnut soup has 4. This means that eating kokonte and groundnut is a superior food
By Prof. Raphael Nyarkotey Obu
Home & Food 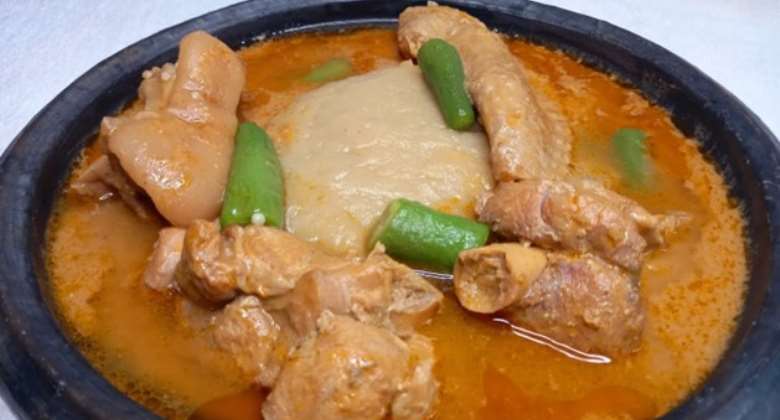 Recently, I wrote about kokonte and why it has the potential to reduce colon cancer. The article further highlights the numerous significance of eating kokonte and its impacts on our health such as reducing blood sugar, high blood pressure, and many others. In this article, I will explain to you why kokonte is a super food in the Ghanaian jurisdiction. Besides, any food that takes a longer time to break down the glucose and fructose to be absorbed by the blood is truly healthy. While light food such as white rice takes less than an hour to break down, kokonte takes longer hours as propagated. Rice only takes 45 minutes to be absorbed by the blood, thus increasing the risk of diabetes.

Many nutritionists even claim that the longer it takes for the local food to digest is unhealthy. This is purely a wrong nutritional doctrine. It is also nothing but a food conspiracy by the industries that want to sell their foreign products with the healthy label.

The problem lies in the staples, not the accompaniments. For decades, we have been eating the wrong staples. It is high time people see that and eat their local healthy foods like kokonte.

Before we delve into the article, let’s examine what the glycemic index is all about. The Glycemic index (GI) quantifies and measures the blood glucose-raising effect of a food containing a specific amount of carbohydrate. Due to these, concerns have been raised about the quality of carbohydrates and the indices that influence their metabolism. Remember that not all carbohydrates are created the same. Let’s tackle the studies to justify why kokonte is a superfood.

One recent study which makes Kokonte a superior diet was conducted by Yeboah et al.(2019). Yeboah and colleagues aim to investigate the effect of processing on the glycemic index of five Ghanaian corn and cassava staples. In this study, ten healthy subjects consisting of five males and five females were included. Study subjects were served 50g of pure glucose containing 50g of available carbohydrates and 200ml of pure water. Glucose, which served as the reference food was given to subjects on two different occasions. The subjects were also served specific 50g of abolo, akple, kafa, local kokonte, and processed kokonte on specific days. The glycemic index figures were assessed by using official methods and reported as the mean for the ten study subjects. The study found that locally made kokonte had the least GI of 7 followed by processed kokonte which had a GI of 18 whiles kafa had a low GI of 29. Abolo had a medium GI value of 58 and akple also had a medium glycemic index value of 69. There was no significant difference between the GI of locally made kokonte and processed kokonte indicating processing had no significant effect on the GI of kokonte.

Among the corn staples, kafa had the lowest GI whereas abolo and akple had medium glycemic figures 29,58, and 69. In Yeboah et al.(2019) study, they found that corn-related diets have high GI as compared to cassava-related diets. This disparity was explained: Just like the other corn staples, cassava went through some series of processing methods and then finally boiled it before consumption. These series of processing methods include peeling, washing, cutting into specific sizes, sun drying/fermentation, pounding, milling, and sieving/shifting. Two studies(Ascheri et al. 1995; Cereda et al. 1985) explained that the process of sun drying and fermentation occurred and this introduced some amount of acetic acid into the cassava. Two other studies (Demiate et al. 2000; Pereira et al. 1999) found that some microorganisms such as amylolytic enzymes and organic acids such as acetic acids are formed during cassava fermentation. This could be a contributing factor to the reason why both processed and locally made kokonte had lower glycemic index values.

Brand et al.(1985) further cement that sun drying and cooling affect starch breakdown and in turn affect glycemic response and glycemic index figures. The hot temperature treatment and cooling cycles which occurred during the cassava flour production could have some amounts of retrograded starches. The presence of these starches in flour makes it less susceptible to being digested by digestive enzymes. These, however, reduce the glycemic response and in turn reduce the GI value. This could also account for the reason why both locally made and processed kokonte had low GI values. It has been established that during the preparation of both processed and locally made kokonte, the cassava flour was added to boiling water and kneaded. As time went on, more flour was added to the mixture and kneaded to prevent the formation of lumps and achieve the desired thickness. As time went on the fire was reduced to prevent food from burning. This in turn reduced the amount of heat that was applied to the food. The final product was taken from the fire and allowed to cool for a few minutes. The reduction of heat during the process of preparation and cooling, which occurred at the end of cooking could have resulted in retrogradation and this could have introduced some amounts of resistant starches which are not normally susceptible to digestion by the digestive enzymes. This factor could also account for the reason both processed and locally made kokonte had low glycemic index values.

Effects of Soup, Meat, and Fish Eaten Together with Test Food

Because our local diets are not eaten alone, but with several other combinations. Yeboah et al,(2019) further examined the impact of our local soups and what they found appears interesting. For instance, Abolo was served with 30g of anchovies, whereas akple, kafa, kokonte (local and processed) were served with groundnut soup and beef. The glycemic index of a particular meal is usually based on and influenced by the content of that particular food.

Yeboah et al. (2019) further opined that when a particular food is consumed with other accompaniments, the glucose response to this meal is normally different than consuming that particular food alone without any accompaniment. This support the position by Wolever et al. (1996) that fat, carbohydrate, protein, and other nutrients when consumed together with other test food affect both glucose and insulin responses. Wolever et al. (1996) further note that for fat and protein to affect the glycemic index of a meal, it must have total quantities of about 30g of protein and about 50g of fat.

Further studies were made on the groundnut soup with beef, and anchovies to find out if it had an impact on the glycemic index of the test foods it was eaten with. At the end of the study, it was discovered that groundnut soup had a low GI value of 4 whereas anchovies also had a low GI of 0.9. For instance, Yeboah et al. (2019) found the following:

A glycemic index diet is an eating plan based on how foods affect your blood sugar level. The glycemic index is a system of assigning a number to carbohydrate-containing foods according to how much each food increases blood sugar.

The purpose of a glycemic index (GI) diet is to eat carbohydrate-containing foods that are less likely to cause large increases in blood sugar levels. The diet could be a means to lose weight and prevent chronic diseases related to obesity, such as diabetes and cardiovascular disease.

To avert the rising cases of hypertension, diabetes, and many others in Ghana, there is a need to eat local foods. Kokonte is one of the superfoods we have for health enthusiasts. Studies suggest that a GI diet can help achieve these goals.

The GI principle was first developed as a strategy for guiding food choices for people with diabetes. An international GI database is maintained by Sydney University Glycemic Index Research Services in Sydney, Australia. The database contains the results of studies conducted there and at other research facilities around the world.

Carbohydrates, or carbs, are a type of nutrient in foods. The three basic forms are sugars, starches, and fiber. Mayo Clinic explained that when you eat or drink something with carbs, your body breaks down the sugars and starches into a type of sugar called glucose, the main source of energy for cells in your body. Fiber passes through your body undigested.

Two main hormones from your pancreas help regulate glucose in your bloodstream. The hormone insulin moves glucose from your blood into your cells. The hormone glucagon helps release glucose stored in your liver when your blood sugar (blood glucose) level is low. This process helps keep your body fueled and ensures a natural balance in blood glucose. Different types of carbohydrate foods have properties that affect how quickly your body digests them and how quickly glucose enters your bloodstream.

Comparing these values, therefore, can help guide healthier food choices. Looking at this, locally-made konkonte has a value of 7 which is very low on GI. Eli-Cophie et al.(2017) explained that Carbohydrate foods that are speedily broken down into glucose after eating are classified as having a high glycemic index, whereas those that take a long time to convert into glucose are also classified as having a low glycemic index. In Yeboah et al. (2019), Akple recorded a medium glycemic index value due to the fact, among all the three corn staples studied, it had the lowest amount of dietary fiber of 0.3 g per 100 g and even with its specific amount that contained the 50 g of available carbohydrate, it still had the lowest dietary fiber content of 0.71 g. In the processing of corn to make akple, it was grounded, milled into a fine powder, and sieved to remove all unwanted particles. These processing methods could be contributing factors to the reason why it had the lowest quantity of dietary fiber, both per 100 g and its specific quantity which contained 50 g of available carbohydrates. The presence of a low amount of dietary could be a reason why akple had a medium glycemic index figure.

In the preparation of akple, the corn flour was mixed with some amount of cold water and added to boiling water on fire. This mixture was divided into two parts and the rest was left on fire to boil again. The other half was left to cool for a few minutes. Corn flour was added to the boiling mixture on fire and mixed very well to prevent the formation of lumps. The remaining mixture that was left to cool was added to the mixture on fire and kneaded. Gelatinization of starch occurred when the heat was applied to the mixture on fire in the process of boiling. When the mixture was divided into two and the second part was left to cool for a few minutes, retrogradation occurred. Since the mixture was not allowed to cool completely, few amounts of resistant starches were introduced and are very difficult to be broken down by digestive enzymes since they are less susceptible to them. This could account for the reason why akple had a medium glycemic index. One limitation of GI values is that they don't reflect the likely quantity you would eat of a particular food. For example, watermelon has a GI value of 80, which would put it in the category of food to avoid. But watermelon has relatively fewer digestible carbohydrates in a typical serving. In other words, you have to eat a lot of watermelons to significantly raise your blood glucose level.

To take home, it is advisable, we eat our local diets such as kokonte which has a GI of 7 for those with diabetics and those interested in preventing diabetes, hypertension, etc.