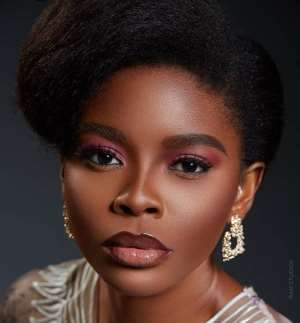 Princess Evelyn Yeboah is a young talented model, writer, entrepreneur and YouTuber. Princess attended Primary school at Tot- to-Teen School, Adenta-Accra. She continued her High School education at Purpose Girls Christian International High School, Gbawe- Accra. She was the first Head Girl of the school and furthered her tertiary education at the University of Ghana, with Public Administration as her major. Princess is currently undertaking her mandatory national service at Burma Camp – Legal department in Accra.

Her childhood beginnings, families and friends used to say, because of her physique, cuteness and beauty, she should be a model when she grows up. She recalled, she went to an event with her mother, people then asked whether, she was born overseas- the skin, manners and her accent. The mother jokingly replied by saying- she was born right here in Ghana.

The journey of her modelling started around June 2020, when she took a picture with her friends’ phone and posted it on Instagram and people started liking it. A photographer directs messaged her that he likes her hair, and want to have a photoshoot session with her. Already, Princess has liked and commented on his works- Ram studios. During her first shoot at Ram studios- she was nervous but Ram was surprised because of the kind of posting style she was giving. The pictures came in, it was beautiful. She showed it to her mother. The pictures went viral for a month in countries such as Nigeria, the USA, and other Asian Countries and also on Pinterest. Due to the comments, she got from people, she started with Face Modeling – due to her facial beauty. Again, her photographer linked her to a modelling company- Apricot. She rocked in the clothes and decided to add Fashion Modeling. Later on, her photographer recommended her to a brand company- Ihairbeautysupply, they into hair, which made her add commercial modelling too.

She did a bridal shoot by Claras Makeover and was photographed by creative vision photography. The pictures went viral and got featured on bellanaijaweddings.com and Pinterest. She wanted to develop herself; she joined Malex Agency in 2020 for a contract of one year. So, she can be groomed and polished her modelling skills. She further added, since she joined the modelling industry, it has helped her to be very ambitious and explored her to different places, which has helped her to improve upon herself in terms of her skills and the modelling industry. She stated that Ghanaian models should be paid very well.

She was waiting for her University of Ghana admission and an idea came into mind, why not start something to earn some money. She went to YouTube to watch videos on how to make Samosa. After watching, she bought a few ingredients at the market. The first Samosa didn’t go well; she didn’t give up, kept on practising and became perfect. To sharpen the skill, she enrolled at a catering school for a month to learn Samosa and Spring Roll making. After graduation from the catering school, she was now a pro in Samosa and Spring Roll making. She had a few contracts from banks, restaurants, families and friends orders. She has a dream for her business and wants Princess’s Crunchy Snacks to be around the world.

She wants to be an inspirational writer to encourage people. While waiting for admission at the University of Ghana, she enrolled at Soronko Academy for 3 months, where she was thought how to create a website. This skill, she gained from the training made her start writing on her blog site. Most of her writings and quotes were based on her personal life experiences. She was writing on the Bondage series. She realized most people don’t like reading. So, she was like, why doesn’t she turn her writing into a vlog so that people who do not like reading will watch on YouTube channel that birthed Princessca Yeboah YouTube channel- a channel that creates content about Princeca diaries, travelling, beauty, fashion, lifestyle, and modelling.

One of her ambitions is to travel around the world. She loves travelling and is a natural person who loves a clean environment. Oprah Winfrey is her mentor, she looks up to most. She aspires to become one of the greatest women who will bring change to the world by influencing the world positively through her talent. She is inspired by Oprah Winfrey’s quote: Passion is energy. Feel the power that comes from focusing on what excites you. She believes that, if one takes that risk to make his or her passion come alive there is nothing that can stop him or her except she or he decides to give up.

Princess can be reached on the following social media handles

I sold my virginity to a fetish priest for money, now my vag...
12 minutes ago

Economic crisis: We are all in this together and we intend t...
27 minutes ago