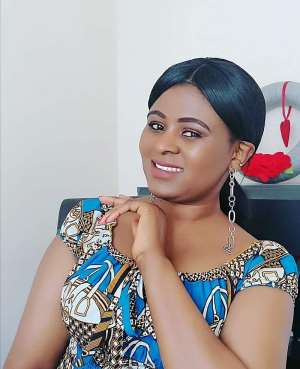 Uterus didelphys represents a uterine malformation where the uterus is present as a paired organ when the embryogenetic fusion of the Müllerian ducts fails to occur. As a result, there is a double uterus with two separate cervixes, and possibly a double vagina as well.

Life challenges can be unpredictable however, they serve as an opportunity to grow.

Woman Reproductive Health Advocate Elizabeth Amoa popularly known as Speciallady came out in 2017 to narrate her story as a woman born with a rare congenital abnormality of the womb called uterus didelphys.

Born with 2 wombs, 2 cervixes, and 2 vagina canals. The story makes her the first black African woman to share her plight with headlines in over 100 countries worldwide.

Diagnosed at later stage in her adult life although she exhibited symptoms from the age of 6years old.

Prior to Elizabeth's advocacy work, her dream was to become a lawyer therefore she completed her Bachelor of laws (LLB) at London Metropolitan University and Master of laws (LLM) at University of Surrey the UK.

She worked in various organisations like Birmingham City Council, British Army Welfare services, Santander Banking Group, Eurostar, NatWest Bank etc. She decided to give up on her career prospects to become the Voice for women and young girls suffering reproductive health issues.

Speciallady Awareness has successfully donated sanitary products and medical items worth several thousands of pounds since it's institution in 2017. Elizabeth has Featured and appeared on several media platforms, Army and You magazine, JUNO magazine and Boots Health & Beauty magazine in UK, Health magazine in USA and other renowned radio, online and television platforms, Her dream keeps seeing the light of day.

Elizabeth's story covered by Born Different has gain grounds and has been viewed by millions of people globally. Focusing on her advocacy, Speciallady has had an opportunity to share her story and to inform patrons at the British Army Wives network event, Community Centres, Local Churches, London Rotary Club of Hendon and at Charity Conference in the UK.

Back home In Ghana, her office has visited various educational institutions such as 2nd Image International Skills College, Odorgonno secondary school, Kanda Training Institute and Al-Waleed Comprehensive Islamic Basic school and many others to educate the girl child on reproductive health topics.

Elizabeth believes her advocacy work will encourage women and young girls to speak up to seek early diagnosis and adequate treatment.

For more information on her charity work visit www.specialladyawareness.com

Hottest Photo Reports
Catch up with all the political quotes from our politicians.
Advertise here
More from People & Places
ModernGhana Links
How Bernard Sokpe’s #Africatotheworld positively influenced Twitter Africa
The Messiah has come, The Third Temple to be Rebuild in the Northern Kingdom of Great Britain
Sharon Ayertey Yomle: The Young Entrepreneur adding value to Gari
TOP STORIES