My delayed performance at VGMAs was planned - Stonebwoy reveals

By Kumah Prince Michael
Behind The Scene 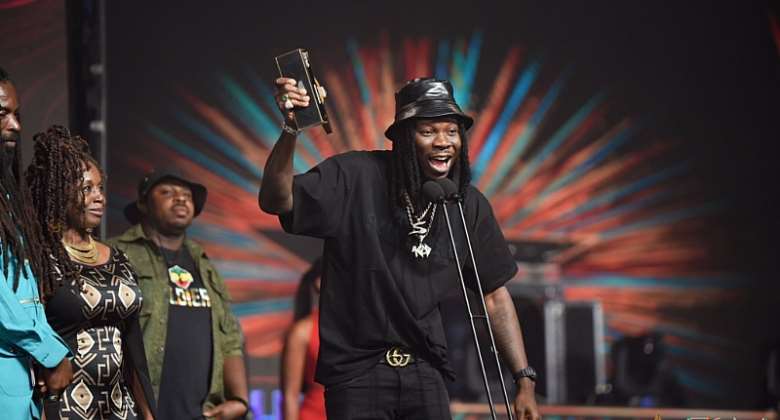 Award-winning Reggae Dancehall musician Stonebwoy has revealed that his delayed performance at the just ended VGMAs was intentional.

According to the ‘Putuu’ hitmaker, the delay was a planned one to make his arrival a surprise to the audience and viewers who were caught up in suspense.

Speaking to Andy Dosty of Hitz FM yesterday, Stonebwoy said he had no idea what was going on backstage but he had to pull up a show regardless because there was an initial plan not to appear on the stage immediately.

“Honestly, I don’t know what was happening in the back to cause the delay but we all understand stuff happens and eventually we had a good show. The plan was not to come on the stage immediately, so it worked in our favor. It’s been a while since I have been on there, so the plan was supposed to make it feel like I won’t be there,” he said.

Stonebwoy who had been absent from the VGMAs after two years won three awards; Music for Good, Vodafone Green, and Reggae Dancehall Artiste of the Year.

His performance that night was preceded by a dance performance by a group from the School of Performing Arts, University of Ghana.

He revealed that his videographer had at some point thought that he had left the event grounds due to unexplained delays.

Assessing the event, Stonebwoy expressed that he believes that event organizers can do more to improve the live performances of artists.

“Honestly speaking, the venues that we have here, we are trying to maximize what we can do in terms of art and being creative. We are trying. If God willing, we do better, maybe one time before you realize I’m just showing up in the sky, somehow,” he added.

E-Levy: Gov’t determined to behave like a vampire to suck th...
48 minutes ago

Gov’t will hide behind IMF discussions to force more hardshi...
48 minutes ago