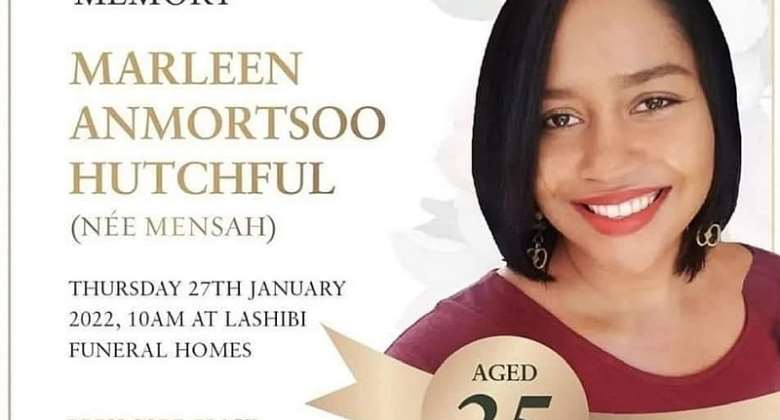 The remains of 'Things We Do For Love' actress, Marleen Anmortsoo Hutchful will be laid to rest on Thursday, January 27.

This will be after a funeral ceremony at the Lashibi Funeral Home in Accra where family, friends and sympathisers are expected to gather and bid a farewell to Marleen.

Reports of Marleen's death went viral on Friday. This has left followers of the one-time popular actress from the 2000s defunct TV series, Things We Do For Love in shock.

It is also unclear what ailment killed her.

“In the year 2000 u joined the #thingswedoforlove family, u brought with u such youthful exuberance making your character as “Lois” a memorable one. Marlene, we part ways with u too soon! We thank God for your life and example, growing into a young lady with a passion to live for Christ. My deepest condolences to your family. The Lord will watch over them. RIP,” actor Adjetey Anang wrote on Instagram.

can’t believe I won’t see you walk by my stand at the market as usual.

Condolences aunty Renate and family. This is hard.”

Marlene was one of the most loved teen characters in the rested series.

She played the role of Lois who was known for her American accent. She wasn't an easy-going character in the series and was all remembered for how she never held back and carried her role very well.

Hottest Photo Reports
Catch up with all the political quotes from our politicians.
Advertise here
More Industry News
ModernGhana Links
Fuel is too expensive, we are tired; Nana force for us — Feli Nuna cries
I was humiliated at a church because of my looks - Songstress Enam narrates
Monetize your nude content — Yvonne Nelson advises Abena Korkor
I didn’t discuss entertainment with Akufo-Addo because a lot has been said already – Edem (Video)
I once stole from a taxi driver when I was broke – Majid Michel
The money I used to promote my first album can build house — Alice McKenzie (Video)
Kizz Daniel sells out the O2 Academy London in the first leg of his Afro classic tour
Rex Owusu Marfo aka Rex Omar re-elected GHAMRO Board Chairman
Dr. Mohammed Awal assures ATWAG of support
TOP STORIES