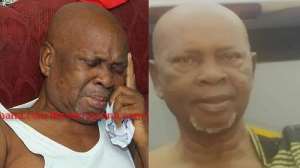 It is yet to be confirmed from a source close to his family but it recalled that the veteran has for close six years been ill and had made several public appeals for support.

Actor and philanthropist, Kwadwo Nkansah, known in the movie industry as Lil Win took to his Instagram page to post about the demise of the actor.

Lilwin in August 2017 donated some local foodstuffs and an undisclosed amount to the old actor.

Another account on Instagram named sweet_maame_adwoa posted the sad development with the caption, "Veteran actor King Aboagye Brenya. May he RIP."

King Brenya as he was affectionately called displayed a brilliant and versatile career as he fitted into the Kumawood and the Ghallywood perfectly due to his control over the Twi and English dialects.

He made appearances in several movies.