A Review Of Johnny Drille's Before We Fall Asleep Album 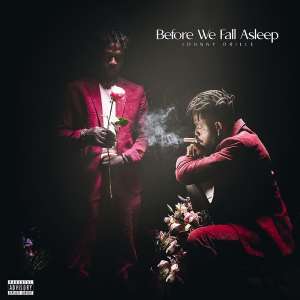 Six years after releasing his debut single as an artist, alternative rock/folk artist Johnny Drille is now out with the release of his debut long play. The album titled “Before We Fall Asleep” was released on September 3, 2021 under Marvins Global Holdings.

Born John Ighodaro, the artist who began music from his father's church has always wanted to be a producer but he had a change of heart in 2013 when he participated in the MTN organized competition “Project Fame West Africa”.

He failed to win the competition but it became a platform for him to make a statement to the fans. His cover of singer Di'jia's Awww caught the attention of Don Jazzy. He followed up the success of the cover with the release of his debut single “Wait For Me” in August 2015, it was nominated for Best Alternative Song category at Headies Awards the following year.

In February 2017, Marvin's records officially announced the signing of Johnny Drille as one of the artists on their roster. He switched things up with the release of the country music-inspired“Romeo and Juliet”. By the second half of 2018, Johnny Drille became a household name, his duet with singer Simi “Halleluya” topped the chart.

In the music industry, a myriad of songs is dedicated to mothers however the eccentric Johnny Drille switched this up with the release of Papa, a tribute to his father (June 2019).

Johnny Drille maintains a close-knitted relationship with his fans. He even knows some by name. A check on his music output since he started music, one would observe Johnny releases a song every three months. At the last count, JD has released 19 singles as an artist. In a country where the attention span is short, Johnny Drille still keeps it going with his fans' with engaging shows like “Johnny's Room Live”, Johnny Music Monday's, his infrequent banter with fans on social media, his selective appearance on other artists' songs: Sound Sultan, Chinko Ekun, etc.

The album release was followed up with a premiere at Film House, Victoria Island, the hugely packed event was an avenue for him to connect with the fans.

On BWFA, Johnny Drille becomes a harbinger of love, a nod to what he is known for, although, this time around, it is an eclectic fusion of different sounds: Neo, Traditional, alternative rock with complimentary input from Afropop.

Johnny Drille produced a boatload of the album with additional input from Burstbrain, London, etc.

BWFA begins with a semi-spoken word by JD. Over an acoustic, he admonishes his love interest to love herself before she can be loved: “you’re so much more/you’ve been hiding in your shell/ for way too long/you would never know/ if you don’t love yourself ”

The lead single “Love is harder” is an uptempo take on the uncertainty of the four-letter words. It celebrates the ups and downs of Love.

Ludo, a popular game in west African, becomes the catalyst for the third track “Ludo”. JD likens the way his lover treats him to the way dice get tossed in the course of playing the game. Rather than wait, he takes the existing route for the next available lover. Ludo continues the uptempo mode of the album.

The song title (Ova) says it's over but on this track JD and label boss, Don Jazzy are both asking for a second chance. A way to right the wrongs. Don Jazzy brings humour to enliven the tense track.

The R&b crew Styl-Plus makes a return—although without Tunde, this time around on JD album. On “Odo”, the old meets the young. Cop the Mark Anthony's “I Need You” interpolation.

Ladipoe dumb down his lifeline for a mellow take on the acoustic, synth, and baseline centered “Driving in the rain”. Both artists let down the guard with the caveat of their lover accepting the love they offer.

Romeo and Julliet guitar rhythm got sampled on “Before I let go”. A stark dank take on love—sad. How do you love again after falling out of love? Ayra Strarr and JD possess the manual via “in the light ”.

On “Clocks”. JD and Chylde both share their frustration in their battle to wade through love.

“LIES” with emphasis on the capital letter is a social satire on the state of the nation. The alternative rock music is wave. Any fan who misses the message should be forgiven. The melody is infectious coupled with the backup singer with their chants of Lie. The Afrobeat-Esque sax solo end reinforces the message of the song. On “Lost in the rhythm” JD narrates the story of a young man who tries to make it out of a frustrating society.

JD explores his vocal range on the riveting “Sweet As A Mother's Love”. On the alternative rock sounds, he likens a love to the one bestowed on a child by his mother.

BWFA ends with two notes. One to his sister and another one to himself. On the gooey and guitar-centered “Sister”, JD encourages his sister to strive on in the face of life challenges. “Sell My Soul” allows JD to speak his truth. Even though he is surrounded by temptation, he vows to stick to standard, just like the popular street dance, he is “focus”.

At the end of the 43 minutes sonic trip, JD helps a vulnerable soul to navigate the murky water of love: Love herself, find love, fall out of love and possibly find love again. Beyond love, he had words for the government and the frustrated Nigerians. By the time he paid tribute to his sister and shared words of admonition about his brand, the victory lap was completed.

Before We Fall Asleep shows that JD is a work in progress, his age-long penmanship and training were evident on the tracks. The tracks were sequentially arranged in such a way it tells an almost complete story. In this current age, a lot of people fail to love themselves, JD corrected that from the jump, it was a strategic statement: before I love you, please love yourself he seems to say. This led to the other eight tracks before he segues to satire and motivations.

BWFA should be worth your time.

The cedi will be stronger, market will react more positively...
29 minutes ago

Pension haircut is a “death sentence” to workers — Franklin ...
44 minutes ago