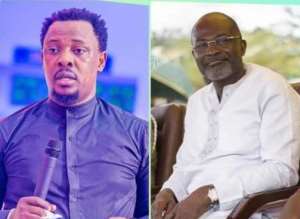 Kennedy Agyapong has applauded Media personality Nana Aba Anamoah for not falling for an alleged trick by Prophet Nigel Gaisie.

According to the Member of Parliament (MP) for Assin Central, the prophet baited the broadcast journalist and general manager of GHOne TV to get her into his bed, but she refused to show up.

But speaking on The Seat Show on Net2 on Wednesday, he alleged that several other female personalities, including actresses and music fell for the leader of the Prophetic Hill Chapel.

Mr. Agyapong, who has vowed to expose fake pastors in Ghana, was speaking about Nigel for the second time on his television station, tagging him as “a fake man of God.”

He emphasized his earlier claims that Prophet Nigel is worse than Bishop Daniel Obinim, and promised to release names of the personalities he had slept with under guise of being a man of God on Monday.

“I have their names here: actresses and radio presenters. The lady I have so much respect for in this case is Nana Aba Anamoah. He tricked her that her father's house at Cape Coast has juju in it and so she should come for him to go and remove it. But Nana Aba didn't go. That's a deep thinker. The rest have all fallen. I have serious names here,” he alleged.

Mr. Agyapong also claimed the prophet is a suspect in the death of the late Ebony Reigns. Meanwhile, Nigel has since been quiet about all the allegations.