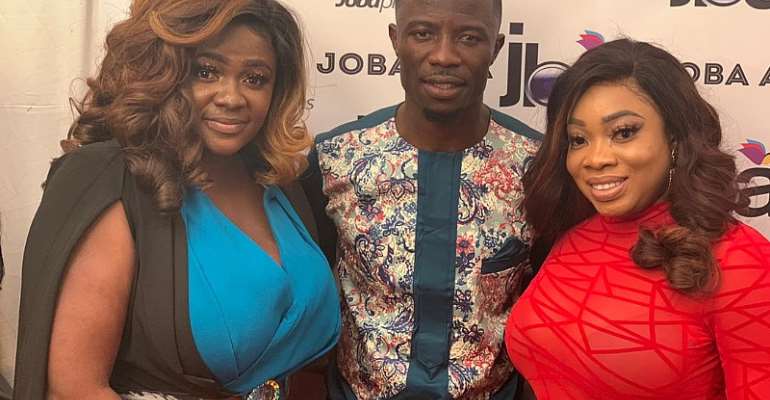 Hundreds of Ghanaians, Africans and other nationals yesterday stormed the Pak Banquet Hall in Bronx, New York in U.S to attend the premiere of Tracey Boakye’s Baby Mama.

The hall was filled to its capacity with movie loving people. True to her words, businesswoman Tracey Boakye who produced the movie did not disappoint the audiences.

The movie which featured well-known Ghanaian actors and actresses-Kalybos, Lilwin, Vivian Jill, Moesha Boduong, Bill Asamoah, Yaa Jackson, Rosemond Brown, Bill Asamoah, Kwaku Manu, Louisa Adinkra, Kofi Adjorlolo, many others, tells a story of a young man from a decent home but had to father a child with a stripper.

From l-r, Ms Boakye, Kwaku Manu and Moesha Baduong, both casts in the movie

Ms Boakye who is the Chief Executive Officer of Shakira Movie Productions expressed her gratitude to all the people who showed up in their numbers to attend the premiere in the U.S.

Since the Baby Mama premiere in Kumasi and Accra, 20th and 25th July 2019 respectively , the movie has enjoyed tremendous patronage with many Ghanaians praising the producers and cast for churning a movie of great quality in the country.

So far 14 movies have been produced by her under the banner of the Shakira Movie Productions. Expect more movies from her very soon.