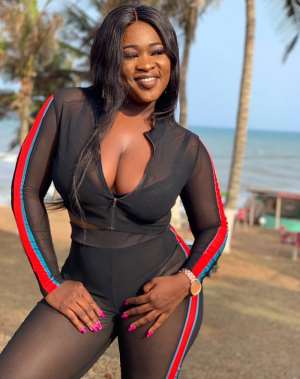 Ghanaian songstress, Sista Afia has debunked claims she is a bad influence on young girls with her vital parts exposed in her music videos.

According to the singer, her choices of clothes are her style to spice up her music videos and performances.

In an interview with a radio station, the well endowed Artiste said, “I put on what makes me relaxed. Don’t blame me; they know stuffs that I do. So I’m not the cause, they’re already spoiled.”

She said nobody can blame her for the choices young girls make in Ghana claiming they should know their right from left.

She gained fame following the release of her single "Jeje", which featured Dancehall Artist, Shattawale and Afezi Perry.

The niece of Presiding Archbishop and General Overseer of the Action Chapel International (ACI), Archbishop Nicholas Duncan-Williams returned to Ghana in 2015 to start her music career and was groomed by Ghanaian singer, Bisa Kdei.