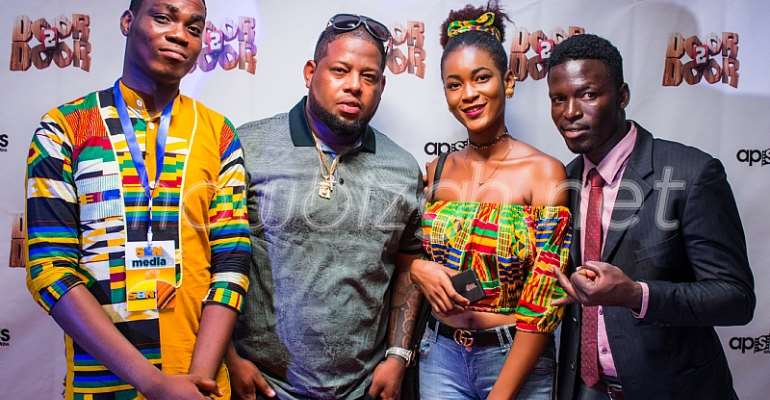 The just ended month, September was held to a standstill in its final hours by a massive premiere of Yaw Skyface’s Door 2 Door movie at the Silverbirds Cinema-Accra mall on Saturday evening.

Despite numerous speculations that the event would be least attended due to various programs scattered around the national capital including the famous ‘Ashaiman to the world concert,’ the event was a massive success. This could be substantiated by the numerous people present with two different shows held at the Silverbirds Cinema with people still unable to watch despite having held another successful premieres at the Silverbird Cinemas, Westhills mall earlier.

The movie co- produced by Yaw Skyface and Kofi Okyere and directed by Yaw Skyface himself, his first movie ever was described by many an attendee as a rare one with accurate angles and a realistic story line while keeping the humor up there. The event which was massively attended had many stars from the entertainment industry passing through; both actors and musicians. Some of the famous faces present were Kwadwo Nkansah (Lil win), Priscilla Opoku Agyemang ( Ahuof3 Patri), Papa Nii, D- Black, D Cryme, Kofi Kinaata and Kobby Rana among others.

‘Door 2 Door’ is a romantic comedy about a lady and a guy who fell in love under strange circumstances after a heated disagreement between them. The movie features kumahood Star, Kwadwo Nkansah Lilwin and Ahouf3 Patri of the famous ‘Boys Kasa’ fame as lead characters with support from Clemento Suarez, Papa Nii, Ebony Reigns and Elia Chebib.

The movie would be out for purchase soon after a planned tour around the major universities in the country.

You can watch the videos on our youtube channel: @Showbiz Network Ghana