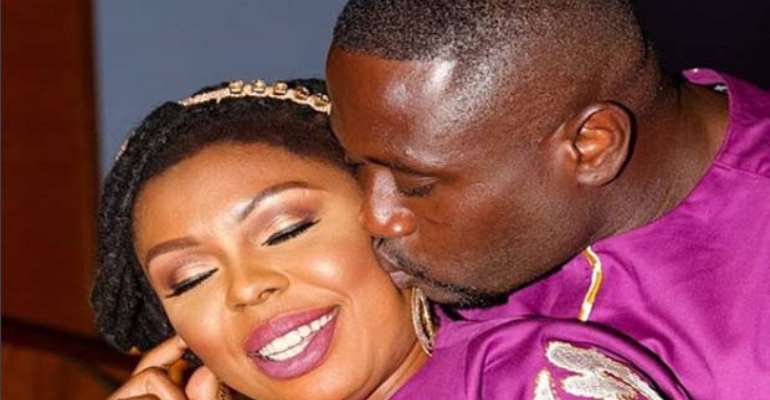 Lawrence Abrokwa, the embattled husband of TV personality and comedienne, Afia Schwarzenegger, has appeared before an Accra Circuit Court for allegedly recording and distributing the naked video of his wife.

The 36-year-old computer technician was arrested on August 30, 2017 after Afia, known in private life as Valentina Nana Agyeiwaa, had lodged a complaint but was granted bail while investigations continued.

He is facing five charges, including two counts of domestic violence, threat to harm, assault and publication of obscene material.

He pleaded not guilty to all the charges.
Prosecuting, Chief Inspector Maxwell Oppong told the court, presided over by Janet Akweley Quaye, that the accused was living with Afia in her Dome Pillar 2 house in Accra but decided to pack out following recurrent disagreements.

He said, the accused, on August 30, 2017, was informed by the housemaid that Afia had a male visitor who would be spending the night with her.

The accused then went to the house and managed to enter by scaling the wall.

He then deflated the tires of the car belonging to Afia's male visitor and entered the room through the back door with the help of the housemaid.

Chief Inspector Oppong told the court that Lawrence Abrokwa was allegedly wielding a knife and bottle of acid with which he threatened Afia Schwarzenegger and the man she was reportedly sleeping with.

He said Abrokwa entered the room with his phone camera on and forced Afia to strip naked, kneel down and confess that she is a prostitute.

He then recorded the nakedness of Afia which he later distributed on social media.

The prosecutor added that the accused later chased Afia out of her own house onto the street while naked, and this caused her emotional and psychological trauma.

Lawyer for the accused, Maurice Kwabena Ampaw, prayed the court to grant Lawrence Abrokwa bail since all the offences he is being charged with are bailable.

The prosecution prayed the court to restrain the accused from further circulating the video in contention.

He also prayed the court to restrain counsel for the accused from attacking Afia on social media in order not to further make her angry.

The court admitted Lawrence Abrokwa to a GH¢20,000 bail with three sureties who must all be gainfully employed.

Ms Janet Akweley Kewi cautioned the parties involved to “ceasefire” while the court determines the case.

Meanwhile, the case has been adjourned to 11th October, 2017.