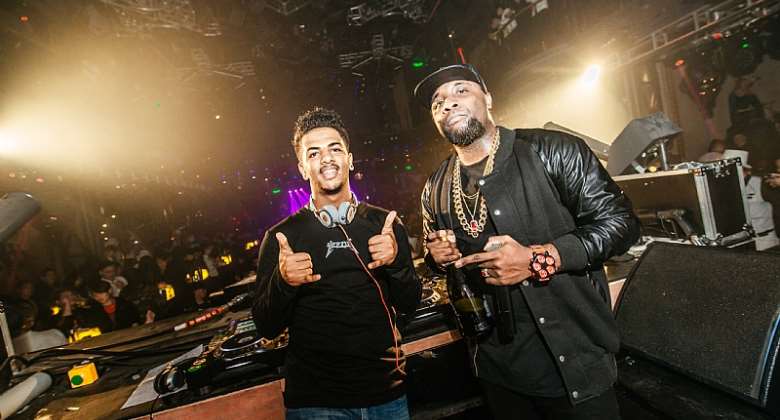 African music has seen a rebirth in the last decade that has opened it up on the world stage like never before. Exploring that growth even further is the China-based duo, Blackbusters comprising MC Rhymes-Apple and DJ St3v3.

Rhymes-Apple originally hails from Ghana while DJ St3v3, also known as Estifanos comes from Ethiopia. Blackbusters first gained popularity in the middle of 2015, after founding and hosting a night party at Playhouse Night Club, one of Asia's most famous nightclubs. During late 2016, they released a number of successful club mixes, which charted on Pyro, iTunes and other websites such as Beatport.

Their first promo videos such as 'We are the Blackbusters' also became viral sensations, each gaining over ten thousands of views on Youku. Around that time, BlackBusters performed at many events, clubs and festivals, such as Harbin Beer Festival, BeatFloor Music Festival and Lantern Music Festival among others. The group also performed at “Lexis court and Friends” on Radio 1 in 2016.

In 2016, BlackBusters signed on to their own record label, Hero Family, and on December 20, they released their first international single. They went ahead to announce on their social network their first tour titled “Energy Tour”, with a record of 60 shows in 42 cities in Asia within a period of two months 15th- 19 June 2017.

Rhymes-Apple Ofori-Atta better known by his stage name as MC Rhymes-Apple holds a Bachelors degree in Arts and double masters degrees in Entertainment Management and International Trade. He started recording his own music in 2003 during his high school days then released a mix tape in 2010 titled ”Fruity Juicy”.

Rhymes, used to be a party mc before he later settled to be residence MC in Beijing Circle Club. He has participated in several Music festivals, which includes the Annual Qingdao Beer Festival, Budweiser Festival, Harbin Music Festival and among others.

He has shared the same stage and collaborated with various top 100 DJs around the world which includes names like Marlo, Paul Van Dyk, Galantis, Diplo, BORGEOUS, Andy Moore, He has so far performed in several countries, toured around Asia most especially Mainland China. Rhymes through tours and various events have meet different people from all walks of life.

DJ St3v3 is a well-spoken and articulate professional Disc Jockey. He has the experience in working on Radio, clubs and music festivals. He started to have a passion for music a early as age 13. Steve has established himself as one of the fastest-growing young DJs and producers for electronic dance music.

He also has an experience of sharing the same stage with top 100 DJs like DJ-BLEND、MAKJ、MARTIN GARRIX, VINAI, DVBBS, Allan Walker as well as sharing his experience with top DJs across Asia names as Zhang, Calvin Z and among others.

Steve's style of music and selection of playlist has the ability to move the crowd. He has been invited to tour a number of well-known brands and music festivals around the world. He has consistently remained in the electronic music industry largely because of his originality and collaborations with other DJs around the world.

In 2016 he became more famous on music download websites, especially on ”PYRO” music website, getting over 2million plays for his mixes within less than a year.