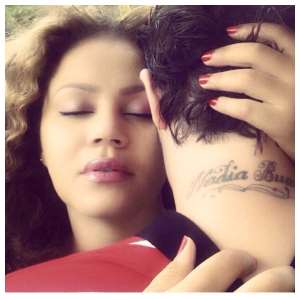 Nadia Buari enjoys the spotlight, thanks to her flawless face; she made news headlines as one of Ghana's best. She is also a very good actress, lately; she has been in the news for the wrong reasons. I would not refer Nadia as a washed up actress, but the pretty woman from Ghana quietly courts unnecessary controversies. Cooked, manufactured and packaged by her very unprofessional bunch of publicists, in her efforts to remain in the news.

When she called it quits with Jim Iyke last year, she wanted the fact that her mum never liked James to remain a big secret. Nadia and her manager did everything to kill the news. When I got the hint that the relationship hit the rocks, I was begged not to write about it. I wrote about it because I hate lies. These twosome wanted to fool writers with fake stories about a relationship that never was. Jim Iyke and Nadia Buari were out to use a phantom relationship to remain in the news circle.

I won't call Nadia Buari, a drama queen, however; the recent saga surrounding the birth of her twins brought to the front burner yet again, news on Buari. At first, rumor mongers said, her twins dad was Ghanian President and now, we are seeing a new picture of a guy who tattooed her name on his neck. She also wrote on her Twitter handle, suggesting the President may be her twins father.

According to a press release by her publicist (who pretends not to write on her behalf), made available to NigerianFM today, Nadia as usual wants to keep writers guessing, in order, to remain in the news circle.

If Nadia chooses to hide the man, that is her prerogative, I thought for the sake of these new-born babies, Nadia should either stay off the limelight or stop the unnecessary drama. We Africans have a culture, newborn babies are a bundle of joy, dragging these twins into a public drama is not the right way to go. Overall, I knew why Nadia Buari refused to acknowledge publicly, that she broke up with Jim Iyke over a year ago. She enjoyed the attention her relationship with James got from the Nigerian press. The twins drama is another ploy to remain in the news. Period.