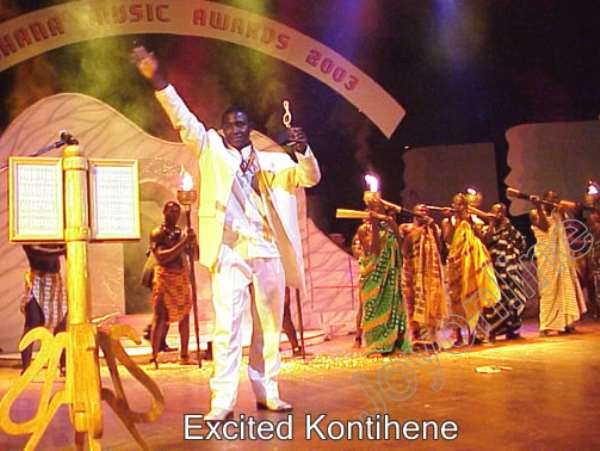 THE media publicity given it was big and expectations were high, not to talk of the anxiety nominees and their fans went through before March 8 2003, the date of the fourth edition of the Ghana Music Awards that came off at the National Theatre. The anxiety was not made any less painful when take-off time was delayed for over one hour and a number of hitches and yawning gaps in the programme were experienced. At the end of a rather long night, Immanuel Nana Appiah Boateng known in Showbiz circles as Kontihene, carried home the prestigious Song of the Year award, probably a surprise to the young artiste himself and a section of the audience. His song Aketesea which was released on his debut album Nyankonton won him this enviable award, which makes it the only newcomer to have won the topmost award at Ghana Music Awards. Kontihene was also the recipient of the New Artiste of the Year award. This year's awards, as had been predicted by a cross-section of the media and music enthusiasts, was highly competitive making it impossible for any one artiste to sweep the awards clean as happened during last year's event which saw Lord Kenya and Daasebre Gyamenah walking away with as many as four awards each. Buk Bak, Kojo Antwi, Daddy Lumba and Esther Smith all went away with three awards each. Buk Bak, who were tipped by many to walk away with the highest number of awards were awarded — Hiplife Artiste of the Year, Sika Kokoo won them the Hiplife Album of the Year while Kluu Blofo got them Hiplife Song of the Year. Kojo Antwi grabbed the Artiste of the Year award, with his album Densu getting him Album of the Year. He was also awarded the Song Writer of the Year for Mmirika. Daddy Lumba took almost all the highlife category awards going home with Contemporary Highlife Artiste, Contemporary Highlife Album of the Year with Poison and Contemporary Highlife Song of the Year with Menya Mpo. Esther Smith swept three awards in the Gospel Music Categories with her Gye No Di album, these are the Gospel Artiste of the Year, Best Female Vocal Performance and Gospel Album of the Year. The rest are: Highlife Song of the Year — Maafio by Adane Best. Best Collaboration — Minka Bio by Tic Tac and Frank Mensah. Best Male Vocal Performance — Atia Donko by Nana Quame. Gospel Song of the Year — Do Something New by Collins Amponsah. Reggae Song of the Year — Traveller by Bulletman. Recording Engineer of the Year — Max Morris. Best Music Video Director — Felix Dakat for Nana Obour. Traditional Song Of the Year — Israel Mawueta and the Supreme Singers of Ho. Special MUSIGA Merit Award — Nana Kwasi Pumpuni. The show would have scored high points if it had ran smoothly like it did last year, sparing the audience uncomfortable pauses and frequent breaks in microphones. One thing that always mars the beauty of such an awards is the absence of the award winners. Some may have genuine reasons for absenting themselves but what about those who simply refuse to go up for their awards? Those who choose to pick awards on behalf of the winners should spare the audience the boring sentence that “ Mr. X is not here so I am taking this award on his behalf.” Goodness, it is obvious the winners are not there! Big Ups to the organisers for ensuring that all those who were invited to present awards were present and their coming on stage was very smooth. Again the rolling of tape for all the nominations was very smooth. Perhaps the organisers should next time around ensure that all nominees are given seats very close to the stage so that it does not take award winners forever to go up for their awards. Nominees may also do well to stay in the auditorium for the smooth running of the programme. Then, if programmes of this nature that have long lists of artistes lined up could start on time, it will save the organisers the embarrassment of some members of the audience jeering at artistes who stay long on stage. Of course when it drags on, people naturally get tired and lose interest in side attractions. Kudos to MCs Kwami Sefa Kayi, Akosua Puni and Kofi Okyere Darko for giving the audience a good show with their smooth delivery, they were a wonderful combination.