Mudasiru Salifu: I Take Inspiration From Muntari And Wakaso [VIDEO] 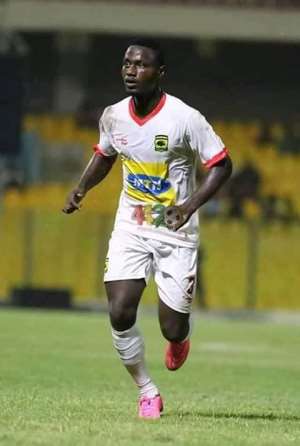 Midfielder for Kumasi Asante Kotoko, Mudasiru Salifu has named Sulley Muntari and Mubarak Wakaso as his idols while noting that he takes inspiration from the pair.

Muntari and Wakaso in addition to enjoying a good career at club level have also paid their dues to the Black Stars team. The former in the past was unplayable in his position in the middle of the park and the latter is currently one of Ghana’s best assets.

In an interview with the Kotoko Express App, highly-rated Kotoko midfielder Mudasiru Salifu has noted that he is always happy to watch the two players and wants to be like them.

“I have been following Sulley Muntari and Wakaso for a very long time since I was a child. When am surfing social media and I come across a video of Muntari or Wakaso I make sure I watch the video. When I see them I feel very happy and I want to become like them”, the 23-year-old shared.

Mudasiru Salifu burst onto the scene in the Ghana Premier League this season before the campaign was suspended as a result of the Coronavirus (Covid-19). He remains a prospect and is tipped for greatness in the near future.

Watch the players interview below: