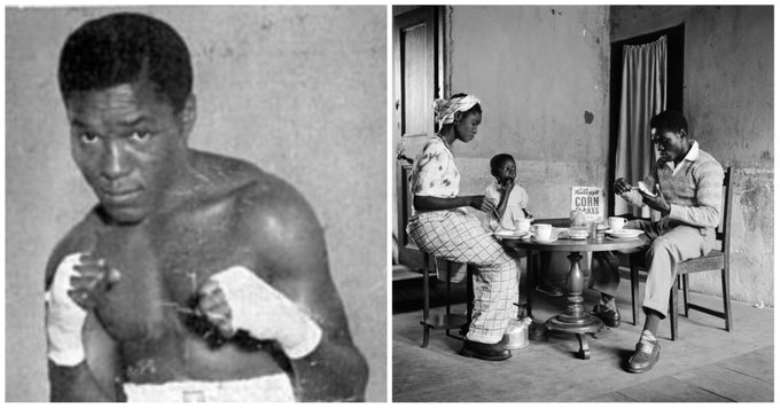 Roy Ankrah, one of Ghana’s foremost boxers, moved Ghanaian boxing into a wider arena when he joined the British Army and was trained by British boxing trainers.

Roy Ankrah and an unknown boxer in a remote area of Ghana in 1952. Roy Ankrah was on vacation from Britain | ph: James Barnor

On his return to Ghana, he taught what he had learned in the army to the Bukom Community.

Though the journey to stardom was almost an odyssey, the Ghanaian boxer John Theophilus Otoo, better strove to the apex of success with admirable and remarkable victories over Kid Hesse, who wrapped up the featherweight title in his absence, before a fourth-round defeat of Stoker Kid Parry of Nigeria in the West African featherweight title bout made him the cynosure of all eyes.

Ankrah (Left) the featherweight champion of the British Empire with Dr. Kwame Nkrumah, leader of the independence movement of the Gold Coast which later became Ghana. (CREDIT: James Barnor)

By November 1950, he had fought 15 cracked boxers, putting him in pole position for the Commonwealth featherweight crown.

He knocked the stuffing out of 10 boxers through knockouts, four on points, and one through disqualification which earned him nicknames such as Black Flash, Fighting Octopus, among others.