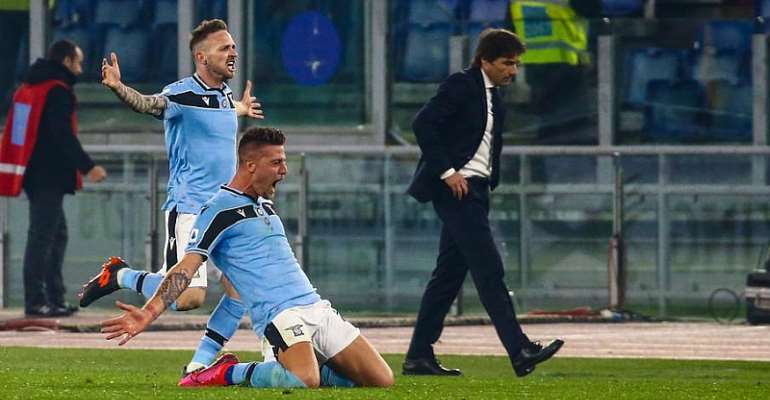 Talking points from the Serie A weekend:
LAZIO LAY DOWN SCUDETTO CREDENTIALS
Lazio left no doubt that they should be taken seriously as a contender in this season's thrilling Serie A title race, as they came from behind to beat Inter Milan 2-1 at a packed Stadio Olimpico on Sunday.

The victory meant Simone Inzaghi's side, who were last crowned Italian champions in 2000, moved above Inter into second place and within one point of leaders Juventus, while stretching their club-record unbeaten run in the league to 19 games.

Midfielder Sergej Milinkovic-Savic was the star of the show, scoring the winning goal to top off a second-half fightback, but the Serbian was keeping his feet on the ground at fulltime.

"What we feel obliged to achieve is a Champions League place," said the 24-year-old.

"We are thinking one game at a time, then we will see where we are.

"A message to Juventus? They need to know that we are here and won't give up."

PASALIC NOT HANGING ABOUT
Atalanta took a huge step towards Champions League qualification when Mario Pasalic scored the winning goal just 19 seconds after coming off the bench in a 2-1 victory over AS Roma.

The midfielder's strike was the fastest by a Serie A substitute since Levan Mchedlidze's goal for Empoli against Sassuolo after just 14 seconds in March 2015.

Pasalic's delightful curling shot was of potentially momentous importance, as it opened up a six-point gap between fourth-placed Atalanta and Roma in fifth while securing a better head-to-head record for Gian Piero Gasperini's side.

"We can fight it out with anyone," Gasperini said.
"Roma aren't out of it yet, as they are very strong especially at home, but we have strong belief that we can finish ahead of them."

JUVENTUS RECEIVE CHIELLINI BOOST
Juventus strolled to a 2-0 home win over Brescia that sent them back to the top of the Serie A table, and there was further good news for the Bianconeri as defender Giorgio Chiellini returned to the pitch for the first time in six months.

The 35-year-old ruptured his anterior cruciate ligament in August, but marked his comeback when he came off the bench for the final 12 minutes.

"The worst is behind me but now the hard part starts," he said.

"I thank (coach Maurizio) Sarri and my teammates, because I needed a jolt of energy and this quarter of an hour gave me that."