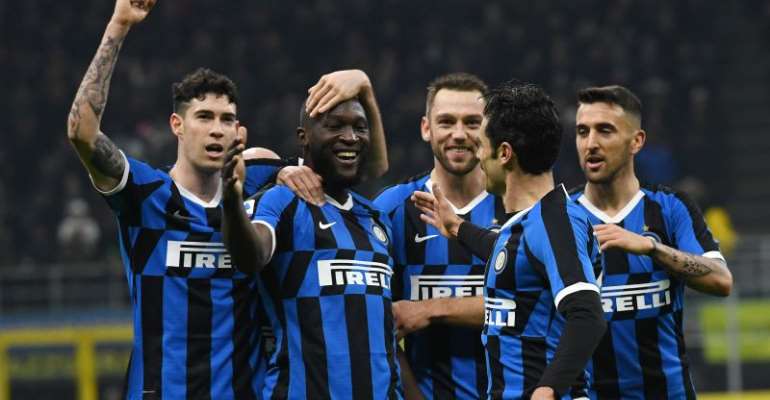 Talking points from the Serie A weekend:
CONTE DARES TO DREAM AS TITLE RACE TIGHTENS
Inter Milan coach Antonio Conte admitted he can't help but think about a league title win after his side went top of Serie A, recovering from a 2-0 halftime deficit to beat AC Milan 4-2 in a thrilling Milan Derby.

"It's still very early to talk about something we can only dream of for now," he said.

"We can have a dream. It's a very intense period for us coming up and after that we'll have a better idea of our potential and our real capabilities."

Inter are ahead of Juventus in first place due to their superior goal difference, while Lazio, who Conte's side face next Sunday, are one point behind them in third.

With a single point separating the first three teams, the top of Serie A hasn't been as tight at this stage of the season for 18 years.

Maurizio Sarri is facing mounting pressure after his Juventus side fell to a shock 2-1 defeat by Hellas Verona on Saturday.

Media reports in Italy on Monday even suggested that the Italian champions are considering sacking the coach and bringing back former boss Massimiliano Allegri, but Sarri has pointed the finger at the attitude of his players.

"If we want Juventus to win games, we cannot keep making errors caused by a superficial attitude," he told DAZN.

"We have to work harder, get dirty when we need to and not rest on our laurels."

The result topped off a superb week for Verona, who held AC Milan and Lazio to away draws before defeating Juve, lifting Ivan Juric's side into sixth place and Europa League contention.

NAPOLI, PARMA FUME OVER VAR
There was more Video Assistant Referee (VAR) controversy on Sunday, as Napoli and Parma raged at not being awarded penalties in their defeats by Lecce and Lazio, respectively.

Napoli striker Arkadiusz Milik went down in the box under a challenge and was booked for simulation, but replays appeared to show a trip.

Club director Cristiano Giuntoli said: "The referee said that Milik accentuated the touch and therefore was booked, but we have VAR and need to use the technology. This is unacceptable."

Parma coach Roberto D'Aversa was furious that Lazio went unpunished for an apparent shirt pull in the box.

He said: "You know what the problem is? When our players are the most sportsmanlike in the league, they take you for a fool."

It’s beyond debate; Akufo-Addo has completely mismanaged Gha...
34 minutes ago

My morale is down – Angry Inspector reacts to mass promotion...
38 minutes ago