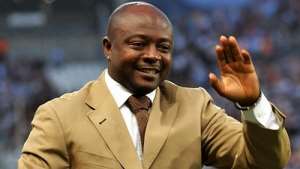 Ex-Black Stars skipper, Abedi Pele, is among a host of coaches who have been given the green light by the Ghana Football Association to coach Division One League (DOL) clubs.

Pele who is the coach and owner of Accra-based side Nania FC is expected to sit in the dugout of the club as they compete for promotion to the elite league next season.

Ahead of the commencement of football matches in the country, the Club License Board instructed all Premier League and DOL clubs in the country to ensure they appoint coaches with CAF License A certificate to sit on their technical bench.

The move forms part of reforms by the new Ghana Football Association to inject sanity in the coaching terrain and football in the country.

The 55-year-old coach who holds CAF License A certificate has been given approval alongside other renowned coaches to coach DOL clubs.

Pele whose team will be playing in Zone three of the DOL was approved alongside other coaches such as Solomon Lutterodt Dauda of Uncle T United, James Nannor of Amidaus Professionals, Ben Fokuo of Kpando Heart of Lions and Prince Owusu of Vision FC.

Ntow Gyan of B.A United, Tamale City’s Hamza Mohammed, Shaibu Tanko of Real Tamale United, Emmanuel Ofori Asumadu of Tano Bofoakwa and Berekum Arsenals’ Solomon Odwo are some of the coaches who were approved to coach clubs in Zone one.

Star Madrid’s Michael Osei, Lord Bright Ellis of Proud United, Abdul Mohammed of Skyy FC, Nana Prah of Venomous Vipers, Ernest Oppong Konadu of Unistar, Salifu Fatawu of Swedru All Blacks and Abdul Rahim Bashiru of New Edubiase are some of the coaches who got the approval for Zone two clubs.

Give EC The Peace Of Mind To Work – NPP Communicator Tells N...
25 minutes ago