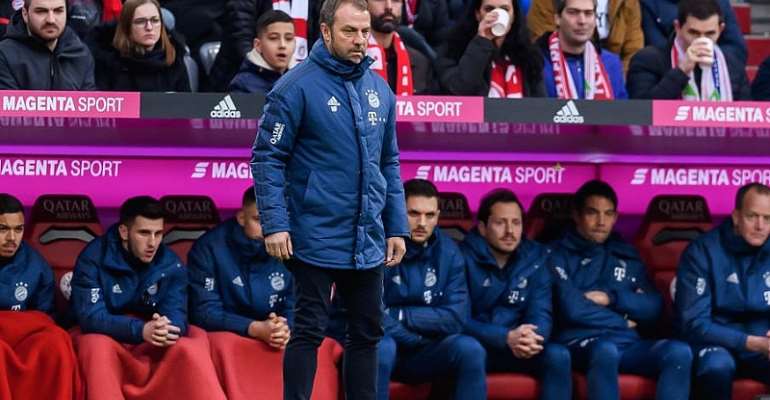 Many of Europe's biggest clubs can go into Christmas with something to cheer.

Bayern Munich, who have been sack-happy in recent seasons, seem to be content with their temporary manager, at least for the present.

Kylian Mbappe proved to be a not-so-secret Santa in France, Atletico Madrid were touched by an Angel, Ajax and Inter Milan can enjoy a merry Christmas on top of the pile. But AC Milan are still not giving their fans what they want.

AFP Sport looks at five of the big talking points round Europe this season.

BAYERN STICK WITH FLICK
Bayern Munich have plenty to be pleased about going into the Bundesliga's four-week winter break with interim boss Hansi Flick having been rewarded for eight wins in 10 games by being kept on until "at least" the end of the season.

The club say "a continuation of Hansi Flick as head coach" beyond next May is "a very conceivable option for FC Bayern" with Paris Saint-Germain coach Thomas Tuchel and Ajax's Erik ten Hag, who have been linked to the role, under contract at their respective clubs until at least 2021.

More good news followed on Sunday as a groin operation on their top-scorer Robert Lewandowski went well and the Poland hot-shot is expected back for their winter training camp in Doha from January 4-10.

Defending champions Bayern are four points behind leaders RB Leipzig and face Hertha Berlin in their first league game of 2020 on January 19.

TWO TALES, ONE CITY
In Milan, there will be mixed emotions this Christmas for the fans of Inter and AC Milan. While Inter sit top of the table and eye their first Serie A crown in a decade after a 4-0 rout of Genoa on Saturday, for their rivals the new year cannot come soon enough. Milan are down in 11th spot after suffering a 5-0 demolition at the hands of Atalanta on Sunday.

It was the first time since 1955 that Atalanta had put four goals past Milan in Serie A while for the fallen giants it was their heaviest defeat in Serie A in 21 years.

Milan coach Stefano Pioli, whose team conceded four goals in the last 30 minutes, admitted: "We got everything wrong from the start."

MBAPPE SHINES ON AND OFF PITCH
World Cup winner Kylian Mbappe illustrated his star quality both on and off the pitch on Saturday as PSG kept up their stroll towards the Ligue 1 title with a 4-1 win over Amiens. A day after his 21st birthday, Mbappe scored either side of Neymar's effort before Mauro Icardi added a late fourth at the Parc de Princes.

Mbappe finishes the year with 41 goals and at least one more admirer in his fan club after he consoled a young boy who evaded security to run on the pitch to grab an autograph with the star striker. The youngster was in tears by the time he reached the player after being pursued by security staff. Mbappe then went on to dress up in full Santa Claus regalia at a charity function following the match.

ALL IN THE DETAIL FOR ATLETICO
Liverpool's opponents in the last-16 of the Champions League Atletico Madrid have had a chequered first half of the season but Diego Simeone's well-drilled side proved once more this weekend they can be counted on to fight every inch of the pitch.

With goals hard to find since Antoine Griezmann left for Barcelona, the feisty Simeone shuffled his pack in the second half at Betis and saw sub Angel Correa score one and create a goal after being dropped from the starting line up.

The demanding trainer's words after the match spoke volumes and Liverpool would be wise to expect a dog-fight if they are to make it to the Champions League quarterfinals.

"Small details win games," said Simeone. "Correa showed what he's made of today, we've been training him hard. He put on good pressure to get the first goal and a nice pass for the second. But I was just as pleased to see him fighting for the win right at the end when the team needed him."

AJAX REBOUND
Ajax can feel a little happier heading into the Christmas break after opening some daylight at the top of the Dutch Eredivise on Sunday.

Ajax were knocked out of the Champions League by Valencia on December 10. Five days later they conceded an added-time goal to lose to their closest Dutch challengers, AZ Alkmaar.

Then, on Saturday, the Amsterdam club announced that veteran international defender Daley Blind had been diagnosed with a heart condition after suffering dizziness in the loss to Valencia.

Alkmaar started the weekend level on points with leaders Ajax but helpfully crashed 3-0 away to mid-table Sparta in Rotterdam on Saturday. Ajax seized the opportunity by pulverising struggling ADO Den Haag 6-1 on Sunday.

Six different players scored as Ajax hit six in 38 minutes either side of halftime. They let up after the 63rd minute even though the visitors played the last 10 minutes with 10 men.

They will resume on January 19 with a three-point lead over AZ.