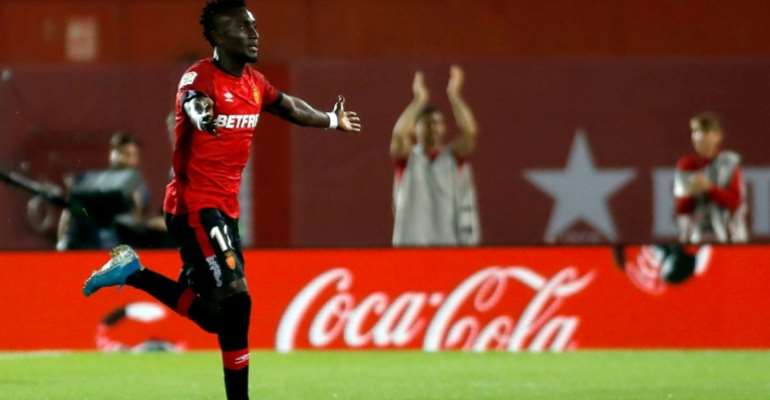 Ivorian Junior Lago stole the show among Africans in the major European leagues at the weekend by snatching the La Liga winner for Real Mallorca against Real Madrid.

Forward Lago struck the only goal of the match after seven minutes to give Mallorca a first home win since 2006 over the record 13-time European champions.

His goal also lifted the club out of a crowded relegation zone to 14th place after a third win in nine league matches this season.

ENGLAND
SADIO MANE (Liverpool)
The Senegal winger was denied a goal by VAR in a 1-1 draw at bitter rivals Manchester United. With Liverpool trailing to a Marcus Rashford goal, Mane thought he had equalised when he slotted home moments later. But the goal was reviewed by VAR and showed Mane had controlled the ball with his hand. Liverpool are six points clear of Manchester City after their 17-match winning league run ended.

WILFRIED ZAHA (Crystal Palace)
The Ivory Coast forward remains without a goal this season after drawing another blank in his side's 2-0 loss to Manchester City. Zaha has gone 10 games in all competitions without finding the net. He was embroiled in a pre-season dispute with Palace after they refused to bow to his wish for a transfer amid interest from Arsenal and Everton.

WILFRED NDIDI (Leicester)
The Nigeria midfielder delivered another influential performance as the Foxes beat Burnley 2-1 on an emotional day at the King Power Stadium. With Leicester paying tribute to former owner Vichai Srivaddhanaprabha one year after his death in a helicopter crash outside Leicester's ground, rock-solid Ndidi's tireless tackling laid the foundations for Leicester's latest success that has taken them to third in the Premier League.

SPAIN
JUNIOR LAGO (Real Mallorca)
Lago will go down in Real Mallorca folklore after his stunning strike secured his team a surprise 1-0 victory over Real Madrid. Lago hit the net finishing a driving run down by cutting inside and finding the far corner with a brilliant, bending finish.

KARL TOKO EKAMBI (Villarreal)
Cameroonian Toko Ekambi scored the winner as Villarreal won 1-0 at Espanyol. He pounced for his third goal of the season after Espanyol goalkeeper Diego Lopez spilt a deflected shot, leaving the forward a simple finish from three yards.

ITALY
KHOUMA BABACAR (Lecce)
Senegalese forward Babacar scored for promoted Lecce in a 2-2 draw against AC Milan when he missed a penalty but turned in the rebound after an hour in the San Siro. Babacar went off with cramp 10 minutes from time.

GERMANY
ACHRAF HAKIMI (Borussia Dortmund)
The Morocco international played on the right-wing for Borussia and caused havoc. Hakimi teed up Julian Brandt in the 83rd minute, but the goal was waved away by VAR. Dortmund beat Bundesliga leaders Borussia Moenchengladbach 1-0 to return to the top four and snap a three-game winless streak.

ANTHONY UJAH (Union Berlin)
Nigerian Ujah was the 83rd-minute substitute and moments later had the best view in the house for Union's second goal. He helped drag defenders away from his partner Marcus Ingvartsen, who scored the goal that sealed a 2-0 win over Freiburg.

KASIM ADAMS (Fortuna Duesseldorf)
Ghanaian Adams gave Fortuna a full 90-minute shift as a key member of a winning side, with a 1-0 victory over Mainz pushing them out of the relegation zone. The defender had an easier time after a red card reduced Mainz to 10 men, but his tough defending was needed throughout and helped secure a clean sheet for the first time this season.

IHLAS BEBOU (Hoffenheim)
The Togo forward came off the bench as his side stopped Schalke going top of the Bundesliga with a 2-0 victory. The 25-year-old played a key role in the first goal and scored the second by clinically finishing a counterattack.

FRANCE
ISLAM SLIMANI (Monaco)
Wissam Ben Yedder might have taken all the headlines after scoring the late winner that snatched the three points against Rennes, but his strike partner Slimani was just as important to the 3-2 win. The Algerian international laid on the first of Ben Yedder's brace early on. He then levelled the scores after Faitout Maouassa and Adrien Honou had put Rennes in front, bringing his Ligue 1 total to five to go with a host of assists and his partnership with Sunday's match-winning hero to 13 goals.

HABIB DIALLO (Metz)
Promoted Metz were bottom of Ligue 1 coming into the weekend but they pulled themselves out of the drop zone thanks to their in-form Senegalese striker Diallo. The 24-year-old downed high-flying Nantes 1-0 with his seventh goal of the season four minutes from the end to lift his side to 16th. Habib has scored over two-thirds of his team's league goals, form that will be crucial to Metz's bid to stay up.