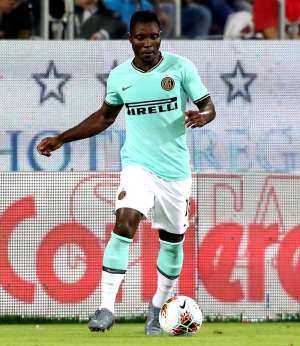 Lautaro Martinez headed the visitors in front after 27 minutes but his celebrations were cut short by a raised offside flag, although the goal was awarded after a lengthy Video Assistant Referee (VAR) review.

The Sardinian side levelled five minutes into the second half when Joao Pedro powered a header home from a whipped Nahitan Nandez cross.

Stefano Sensi's free-kick rattled the bar for Inter on the hour mark and the midfielder then proved crucial in the winning goal as he was tripped by Fabio Pisacane to hand Romelu Lukaku the chance to convert from the penalty spot.

Asamoah's side welcome Udinese to San Siro in their next league fixture after the international break.

Inter lead Serie A after two rounds on six points along with Torino and champions Juventus, while Cagliari have yet to pick up a point.