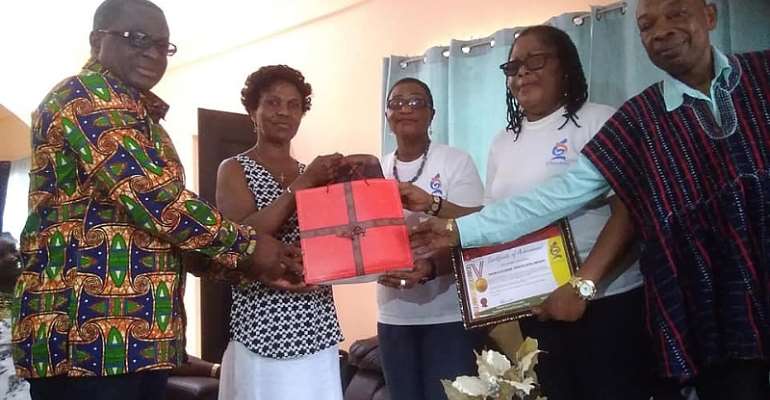 The Women In Sports Association (WISA) has honoured Madam Alice Annum, a former top athletics champion at her family residence at La in Accra.

The USA based international superstar expressed her surprise, joy and feelings that indeed the nation of Ghana must recognize and honour its sporting heroes to encourage the youth and rising stars.

Alice Annum now 70 years old and living in Maryland in the United States said the government of Ghana only put her name in a Hall of Fame, but she wants to receive the promise of a house a Dansoman as she also paid for her trip to the USA in 1971.

According to the original “Baby Jet” aka “Flying Queen” of Africa in the late 1960s and early 1970s, Ghana Athletics can rise again if athletes are given more respect than footballers, and there is more frequent Inter Schools / Colleges competitions as well as the return of the Ghana Nigeria Friendship Games.

She was sad that the tartan (running) tracks have been removed at the Accra Sports Stadium, and the only place for athletics in the capital is either El Wak or the University of Ghana, Legon where many people cannot go to train or run.

Alice Annum who set national and African records in the 100m, 200, and long jump recalled her graceful days and how she came by the name “Baby Jet” after her wonderful performance at the 1970 Commonwealth Games in Scotland.

Madam Gloria Commodore, executive director of WISA supported by Cynthia Lamptey an executive member presented her with a certificate and other items.

At the impressive ceremony were the president of the Ghana Olympic Committee (GOC), Ben Nunoo Mensah and deputy director general of the National Sports Authority (NSA), Saka Acquaye who represented the Ministry of Youth & Sports.

The GOC president commended Alice Annum for raising the flag of Ghana high and still recognized as a legend. He urged the current youth to read about the good old stars and try to be like them. He said it would be befitting if the government names one of the new sports facilities being built all over the country after her and other superstars.

Saka Acquaye advised Ghanaians to engage in sports as there are many benefits and also thanked Alice Annum for her exploits in make Ghana shine on the tracks.