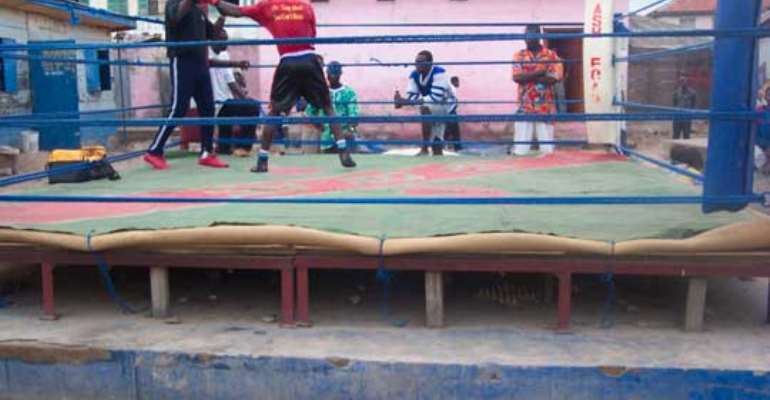 Graphic -- Tonight at the Azumah Nelson Sports Complex,a Ghanaian will seek to tread the path that led to the Complex being named after the legendary boxer,Azumah Nelson.

'Bukom Tsatsu'Joshua Okine challenges Nigeria's Fatal Onikeke for the Commonwealth welterweight crown at the Azumah Nelson Sports Complex in one of three title fights put together by Ambition and Obric Sala Promotion and Management Limited.

Twenty-five years ago the legendary Azumah Nelson mounted the ring at the then Kaneshie Sports Complex and displayed a smashing performance that won him the Commonwealth featherweight title.

His efforts won him a place in the WBC Hall of Fame as he cemented his place in history.This is the history that has motivated Okine throughout his training for tonight's fight.

Advantaged in height and reach, Bukom Tsatsu Joshua Okine has predicted an easy victory over his opponent in tonight's Commonwealth welterweight title fight.

“I shouldn't have any difficulties with him,” he told a pre-fight news conference yesterday at the venue for tonight's clash.

But his opponent, an orthodox fighter, insisted that the Ghanaian would be just the latest of his victims. Onikeke the 'bicycle rider'holds the Commonwealth, African and Nigerian welterweight titles with an unblemished 15-0 (11 KOs) record.