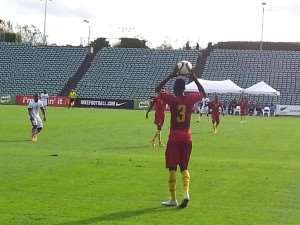 
Ghana's Under-20 team recorded an impressive 4-2 win over Qatar in their opening four-nation tournament in New Zealand on Monday.

The Black Satellites rallied from behind to beat their opponent at the North Harbour Stadium.

In a massive show of character, the Ghanaians underlined their title credentials ahead of the 2015 World Youth Championship with a four-star performance against the Asian side.

Coach Sellas Tetteh is using the exhbibition game to sharpen the rough edges of his team ahead of the start of the tournament on May 30.

The 2009 World champions will next play host New Zealand on Sunday before wrapping up their mini-tournament with a game against Australia.

The Ghanaians are housed in group B where they will battle recorded holders Argentina, Panama and Austria.