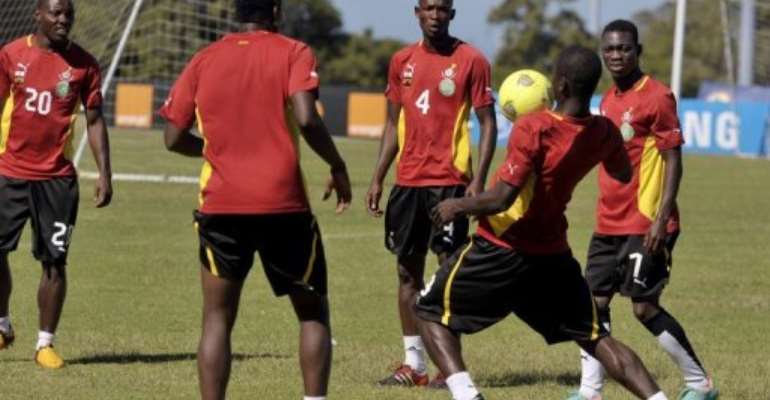 PORT ELIZABETH, South Africa (AFP) - Four-time champions Ghana have hit form at the right time and should end the fairy tale run of Cape Verde when the teams clash Saturday in an Africa Cup of Nations quarter-final.

After struggling in their drawn opening group game against the Democratic Republic of Congo, the Black Stars were a different class when easing past Niger 3-0 in one of their best displays in a long time.

However, coach Kwesi Appiah fired a warning shot to title rivals when he said his team are still far from their best.

"We stepped up against Niger but, with 11 debutants at this competition, we can do much better," said the former international defender.

"There were a few details I was not happy about in our last game, a few cases of tactical indiscipline, but we are about 70% toward our capability now."

Since 2004, both teams have clashed three times with Ghana posting a perfect record against the Blue Sharks.

Last November, Ghana beat Cape Verde 1-0 in Portugal in a friendly, but Appiah said he would not read too much into that result.

"It won't be an easy game against a physical, tactically disciplined side like Cape Verde, who have nothing to lose at this stage of the competition," said the handler.

Ghana will be a full-strength after three injury-hit stars -- Mubarak Wakaso, Anthony Annan and Richmond Boakye-Yiadom -- returned to training.

Wakaso was the match-winner against Mali and also scored the only goal against Cape Verde in Lisbon last year. He missed the Niger match because of a ban, and would have been sidelined anyway by a sore knee.

In his absence, Porto youngster Christian Atsu shone, and Appiah said he could line up both players against Cape Verde because they can operate in various positions.

Solidarity and the motivational skills of coach Lucio Antunes have combined to write one of the biggest success stories at this tournament.

Antunes, an air traffic controller on a sabbatical, had a six-day internship under Real Madrid coach Jose Mourinho before the Cup of Nations and said his team will not be overwhelmed against Ghana.

"They are one of the best teams in Africa, but we will keep working hard and believe we can win," said the 46-year-old.

The Blue Sharks were not overawed on the opening day of the tournament against hosts South Africa in front of a 80,000 crowd at Soccer City in Soweto, having the better of a goalless draw.

Skipper Nando, Ryan Mendes and Platini have already carved a niche for themselves at Africa's showpiece football event, giving hope to all the less fancied teams.