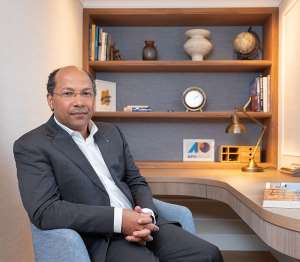 Mr. Nicolas Pompigne-Mognard, the Founder and Chairman of APO Group has assured that his outfit remains committed to promoting sports on the African continent to advance peace towards violence prevention.

After doing some exceptional work to become the leading pan-African communications consultancy, APO Group now manages the Pan-African public relations of FIFA, the NBA, and the Basketball Africa League.

Continuing its work in Africa, Mr. Nicolas Pompigne-Mognard has told Modernghana Sports that the work of APO Group is not done.

According to the chairman, APO Group is passionate about sports and wants to use it to fuel the promotion of among other things, peace, education, and health.

“APO Group is exceptionally passionate about sport and sees it as a valuable way of promoting education, peace, violence prevention, gender equality, and health in Africa. We have worked extensively with associations and organisations across the continent to raise the sport's profile in Africa.

“APO Group has joined forces with Vivendi Sports, part of the Vivendi Group, a 16-billion-dollar turnover company providing services to the sports industry across Africa. Vivendi Sports is, for instance, organising the next African Cup of Nations in Ivory Coast.

“This, as you can see, puts us at the forefront of promoting sport on the continent and promoting African sport to a global audience,” Mr. Nicolas Pompigne-Mognard noted.

His outfit is a major promoter of Africa’s economic growth across all sectors. It also promotes the growth of African sports among other things.

It is also the Strategic Partner of the Association of National Olympic Committees of Africa (ANOCA), the governing body of the Olympic Movement in Africa.