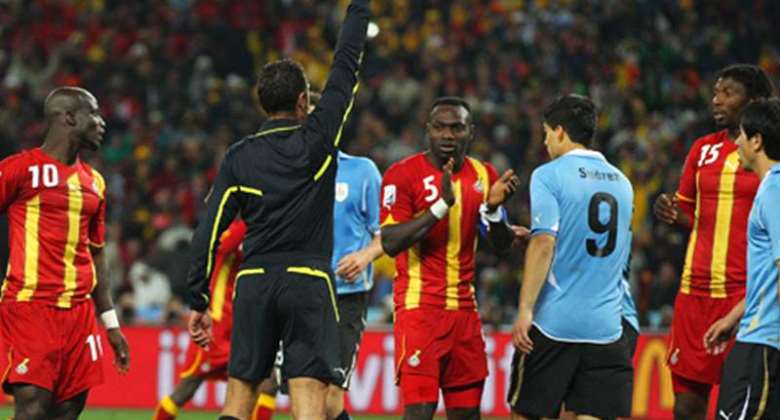 Former President of the Ghana Football Association Kwesi Nyantakyi says if there was a Video Assistant Referee (VAR) at the 2010 FIFA World Cup in South Africa, that Luiz Suarez handball would have been adjudged a goal by officials.

Indeed, he indicates that the Assistant Referee was running to the centre line until the then captain of the Black Stars went to the centre referee to gesture for a handball incident against the Uruguayan striker.

But for that action by John Mensah, the longest-serving GFA President contends, Ghana would have been in the semi-final and probably won that world cup.

It was heartbreaking for most football fans on the African continent in 2010 as a last-minute Dominic Adiyiah goal-bound header was punched out by Uruguay striker Suarez.

He was red-carded by Portuguese official Olegario Benquerenca and a penalty was awarded to Ghana.

But striker Asamoah Gyan, who had scored two penalties in the group stage for Ghana, hit the bar despite sending Uruguay’s Fernando Muslera the wrong way.

That crucial quarter-final match ended 1-1 in regular time but the South Americans won 4-2 in the resultant penalty.

Luiz was rewarded by his nation for that singular action.

Speaking on Onua TV‘s Maakye on Friday, January 7, Kwesi Nyantakyi said Ghana would have been awarded the goal if John Mensah had not gone to the referee calling for a handball infringement.

He said most of the footballing incidents are missed by referees but they use psychology and players’ reactions to call some of the incidents.

He, therefore, commended officials of the Confederation of African Football (CAF) as well as FIFA for introducing VAR to the upcoming nation’s cup.

VAR will be employed for the first time at the 2021 Africa Cup of Nations, which begins on Sunday in Cameroon.

Serwaa Broni attack: Give us information to impeach Akufo-Ad...
36 minutes ago