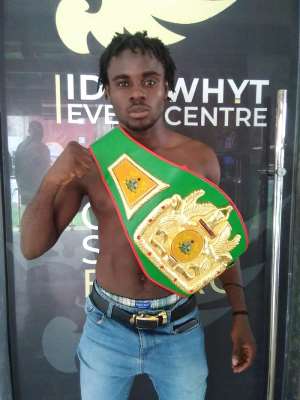 19-year-old, Joseph Akai Nettey wrote his name in the history books on Boxing Day December 26, 2021, when he stopped Prince Boah in round 5 to become the new Royal Boxing Organization (RBO) Light Flyweight Champion.

He displayed the classic artistry of boxing at the Idrowhyt Events Centre at Dansoman to the amazement of patrons and guests who really enjoyed one of the memorable moments in Ghana Boxing.

On a night of delightful boxing put together by Cabic Promotions, Nettey, a product of the Charles Quartey Boxing Foundation gave credence to his billing as a future world champion.

Osmanu Haruna weighing 266. 60lbs became the new National Heavyweight champion when he beat Nii Ofei Dodoo who came in at 258.90lbs via a TKO. The former Black Bomber entertained fans with his Muslim music after the exciting bout. He dedicated his new title to his fans and family.

Obodai Sai stopped Jedida Doku in their Middleweight contest and will meet Abubakar in a few months time.

Experienced duo, Isaac Sowah and Daniel Adjei, popular boxers from Bukom gave fans a good run for their money with real mix of experience and exuberance.

Emmanuel Quaye, a product of Cabic management knocked out Amoak Sampson in their Super Welterweight duel.

Samed Mohammed, manager of Akai Nettey, Jessie Manyo Plange who is now based in the USA, Micheal Ansah aka One Bullet and Osmanu Haruna told Yours Truly to alert Ghanaians to watch out for more from his camp of aspiring and potential world champions.

Mr Gideon Ohiadzo aka Jingles, Marketing and Promotions Manager of Idrowhyt Center and Cabic Promotions said their premises is open and welcome guests who wish to have a royal treat of entertainment, food and sports, including swimming.

Mr Ellis Quaye, a Director of Cabic Promotions commended the boxers for putting up a good performance.

Hon. Nii Lante Vanderpuije, MP for Odododiodoo, who was a special guest also congratulated the boxers on the bill for their excellent shows and inspired the GBA to sanction good pairings to give boxing fans worth of their monies.

Mr Abraham Neequaye, the GBA President hinted that the face of Ghana Boxing is changing with innovative products and programs such as the Professional Boxing League.

He thanked all stakeholders of the game of boxing in Ghana and wished them a prosperous new year.

Mohammed Amin Lamptey, Communications Director of the GBA was MC on the night which was telecasted live on Max TV, the media under IMax Media Group that have signed a deal with the GBA to organize the Ghana Professional Boxing League from February 2022.