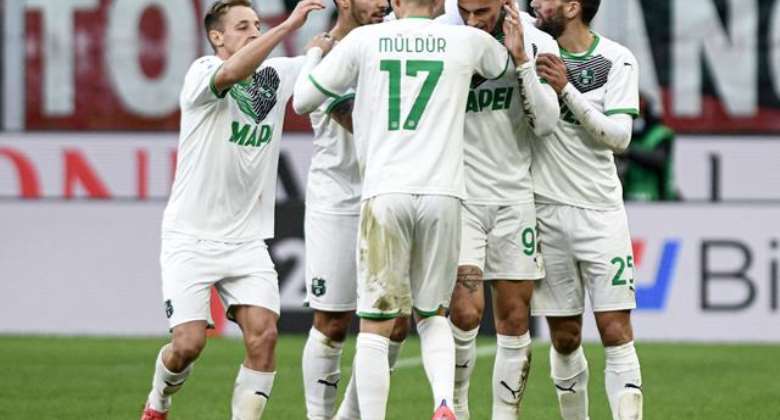 AC Milan blew the chance to go top of Serie A as Sassuolo fought from behind to win 3-1 at the San Siro.

With Napoli playing later this evening Milan had the opportunity to throw the ball into their title rival’s court and ask questions of their credentials, whilst also proving that last weekend's defeat to Fiorentina was just a flash in the pan result.

It all looked like it was going to plan after 20 minutes when the hosts went a goal up thanks to their captain Alessio Romagnoli. From a short corner routine, the defender managed to escape his marker and head the ball into the back of the net at the near post.

But Milan’s lead lasted less than three minutes when the visitors hit back through a stunning Gianluca Scamacca effort. The striker found time and space at the edge of the box and bent his shot into the top corner, leaving Mike Maignan rooted to the spot.

Things then went from bad to worse for the hosts as they found themselves a goal behind within ten minutes of conceding their first goal. They failed to deal with a Sassuolo corner, with the ball falling to Scamacca who fired his shot at the goal which deflected off Simon Kjær to make it 2-1.

At the start of the second half Stefano Pioli made a collection of changes in order to kick start his side into action, but despite the switch in personnel they struggled to break down Sassuolo, who decided on the best form of defence is attack.

This tactical approach paid off for the visitors when they went 3-1 through Sassuolo talisman Domenico Berardi, who wiggled his way through the Milan box, before slotting the ball past Maignan, to put the game beyond doubt.

Next up for Milan is an away trip to take on Genoa, while Sassuolo continue their top of the table encounters as they host Napoli.