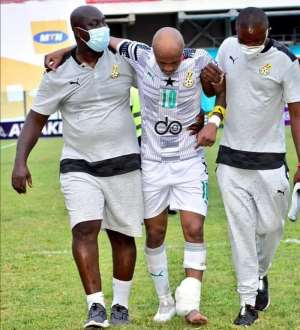 Ghana captain Andre Ayew has claimed down fears after picking up an injury in the Black Stars final 2021 Africa Cup of Nations [Afcon] game against Sao Tome and Principe.

The Black Stars wrapped up their qualifiers with a 3-1 win at the Accra Sports Stadium on Sunday.

The Swansea City ace played the entirety of the match, although he looked in serious discomfort following the conclusion of the game.

However, Ayew was being assisted off the field of play following the full-time whistle.

Ayew limped off while wearing heavy strapping above his left foot and being carried by two members of medical staff.

But in the post-match conference, the 30-year-old said the injury is not that serious despite feeling some pains at the dying embers of the game.

“It is a knock," he said after the game.
"The doctors have seen I can’t put my leg on the floor but I will be fine," he added.

Ghana will now turn their attention to the 2022 World Cup qualifiers this year.