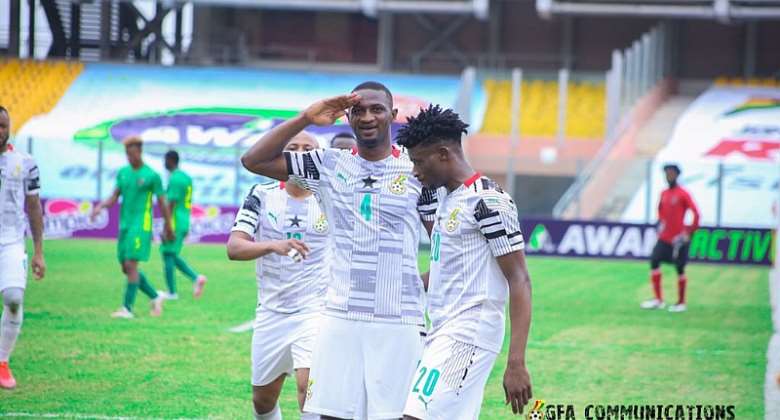 The Black Stars today hosted their Sao Tome counterparts in the final qualifying match to the 2021 Africa Cup of Nations (AFCON) tournament scheduled to be hosted by Cameroon next January.

Starting in the heart of the defense for Ghana, Nicholas Opoku jumped highest in the 12th minute to head home an inviting cross from Ajax sensation Mohammed Kudus to give the home team the lead.

Continuing to dominate the visitors, the Black Stars doubled their lead in the 31st minute when they were awarded a penalty kick.

Jordan Ayew who was fouled in the 18 area of Sao Tome and Principe stepped up and expertly converted to give his side a 2-goal lead.

Later in the second half, Mohammed Kudus registered his second assist of the game when he set up defender Baba Rahman to also score his first goal for his national team.

While Ghana looked on course to keeping a clean sheet, a misplaced pass from goalkeeper Razak Abalora gifted Iniesta a glorious chance as he curled in his effort to net a consolation for the visitors.

With the game eventually ending 3-1 for Ghana, the Black Stars will play at the 2021 AFCON as winners of Group C of the qualifiers.