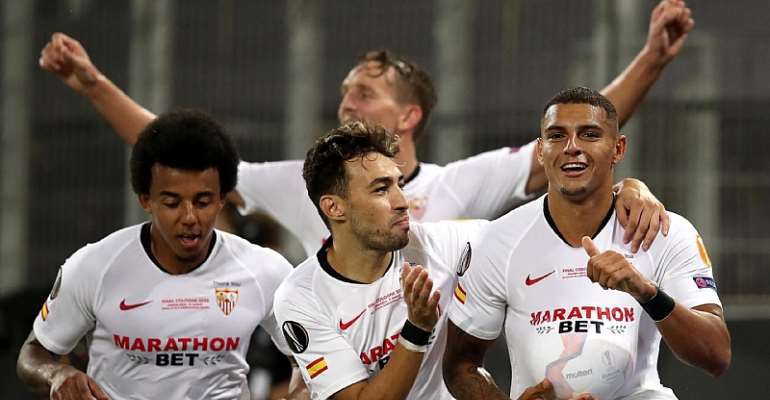 Diego Carlos of Sevilla FC (R) and team mates celebrate their team's third goal, an own goal scored by Romelu Lukaku of Inter Milan (not pictured) during the UEFA Europa League Final between Seville and FC Internazionale at RheinEnergieStadion on August 2 Image credit: Getty Images

Sevilla's love affair with the Europa League lived on after they beat Inter Milan 3-2 in a thrilling final behind closed doors on Friday in Cologne to win the trophy for a record-extending sixth time.

Defender Diego Carlos, wearing a bandage on his leg, struck the decisive goal in the 74th minute with an overhead kick which took a huge deflection off Inter forward Romelu Lukaku.

There was added intrigue as Diego Carlos looked to have denied Lukaku a clear scoring chance when he felled the Belgian in the fourth minute, with Lukaku dusting himself off to fire Inter into the lead while scoring his 34th goal of the season.

Sevilla soon equalised with a header through Luuk de Jong then the Dutchman struck again with a header to give his side the lead in the 33rd minute, only for Inter defender Diego Godin to also score a header moments later to make it 2-2.

The match was played without any fans in attendance due to the COVID-19 pandemic.